Drag queen Courtney Act has hit back at a Liberal senator who attacked her for appearing on Play School Story Time and reading children’s books.

Liberal senator Alex Antic accused the ABC of ‘grooming’ children by having Act read a children’s book about a girl wearing pants.

His comments prompted a furious argument with Greens senator Sarah Hanson-Young, who called his question offensive, during a Senate estimates hearing earlier this month. 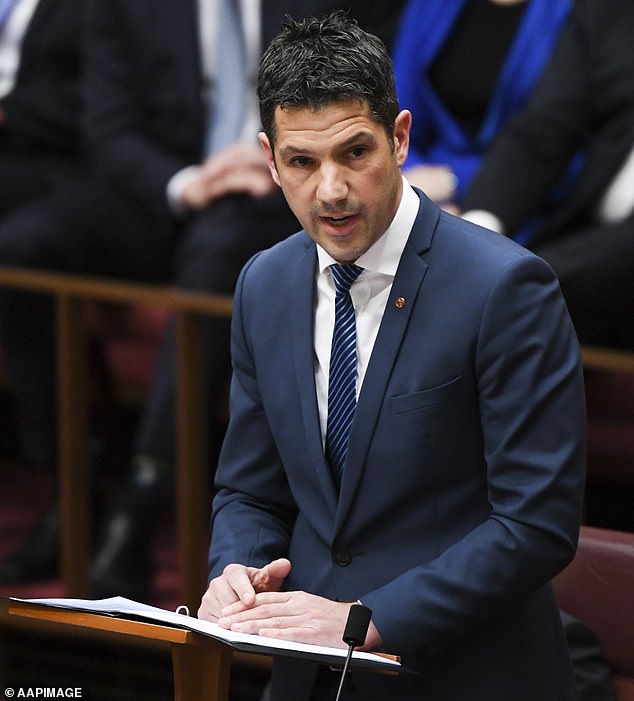 The popular drag queen, writing in the Sydney Morning Herald, admitted she was stunned by the furore.

She wrote: ‘Antic’s concern was that the book I read, The Spectacular Suit, was ‘about a female child wanting to wear male clothing’. It was about a girl who wanted to wear pants, not a dress, to her birthday party.

‘It’s 2022. Surely this point seems absurd to everyone but Antic.

‘I was reading the usual books growing up. I was weaned on TV that only contained heterosexual characters, albeit smurfs, crime-fighting turtles and a talking bath mat.

‘I loved playing dress-ups, like all kids do, and was raised by loving heterosexual people who occupied traditional gender roles.

‘Yet somehow, despite it all, I turned out to be a flaming, proud, successful and balanced queer person. Really, anyone born before the year 2000 grew up in the same world and plenty of us turned out lesbian, gay, bisexual and trans.’

In a strongly-worded piece, she also accused Antic of using US right-wing tactics by describing her appearance as ‘grooming’.

‘Antic referring to my Story Time as grooming is a political tactic to weaponise the protection of children to win political points.

‘It’s ripped straight from the right-wing American culture war playbook. I normally wouldn’t respond and give this fringe opinion more oxygen, but I’ve seen this tactic deployed increasingly in Australia and it needed to be debunked.’

‘The program was rated G and has been heavily promoted on TV and on the app. Why is the ABC grooming children with this sort of adult content?’ he asked.

ABC managing director David Anderson rejected the premise of the question, pointing out the book was just about dressing up.

‘I don’t see that as grooming children with our content. That particular program is reading from a book that is about dressing up,’ he said.

Senator Antic added: ‘It is amazing what triggers a response. The truth. The truth that the ABC is grooming our children.’

Senator Hanson-Young insisted the suggestion of grooming was offensive and needed to be called out.

‘Grooming is a really serious matter. It’s not for being played with by conservative senators to make headlines,’ she said.

But Senator Antic insisted: ‘That is what grooming looks like.’