Light Perpetual is a historical fiction novel about a man moving through a very long war. He’s drawn on by love but his path leads back and forth through both sides of a messy battlefield. The Witcher series author Andrzej Sapkowski’s tale of love and war is finally making its English debut this month.

[Note: While I am reviewing this novel independently and honestly, it should be noted that it has been provided to me by Orbit for the purpose of this review. Warning: My review of Light Perpetual contains some spoilers!]

Light Perpetual is the third book in a three-book series by Sapkowski. The Tower of Fools and Warriors of God preceded Light Perpetual in the Hussite Trilogy. The books were originally published in Polish in 2006. Placed during the real Hussite Wars, they follow Reynevan as he spies his way across Eastern Europe.

In Light Perpetual, Reynevan is trying to find his beloved, Jutta of Apolda. The inquisition has taken her as a way to control him. Instead of falling in line, he begins traveling around the war zone trying to learn where Jutta is so he can save her. His biggest problem is that he has been a very good spy for the Hussites, so good that they know his defection would destroy their cause. Neither side trusts him so both sides begin hunting him.

Reynevan has enemies everywhere, but he has friends everywhere too. Unfortunately, people switch sides like the war is a dance and Reynevan is never sure who he can trust or for how long. All he knows is that he must rescue his love. Can he overcome the seemingly insurmountable odds the war places in his way and save Jutta in time?

The receptiveness of war

I confess that I have never been in a war but from what I understand, one of the defining features is the way the days run together. There is a lot of repetition and even the fighting begins to feel the same. Sapkowski captured this feeling perfectly.

Reynevan is repeatedly caught by one side or the other. Then a surprise encounter with a friend results in his escape. Next, he slips away from that friend either because he doesn’t trust them or because he doesn’t want them drawn further into his mess. And he is (usually quickly) caught again and the cycle repeats. 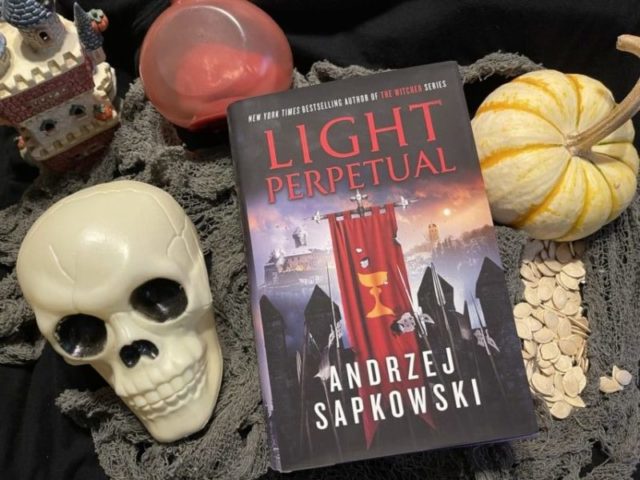 Unfortunately, all of this became rather boring for me. It is the exact same thing over and over again with different names. Or sometimes the same names because the people liked switching sides.

The characters talk about the number of betrayers and chalk it up to the wars being religiously based. People change religions, ideologies can be argued, and it creates a different foundation for fighting than geographically established sides. Whatever the reason for all the defecting, it created an environment where everyone was suspect and true loyalty was scarce. Which of course led to more of the catch-and-release situations for Reynevan.

Light Perpetual gets lost in translation

Light Perpetual was very popular in Poland. It was popular enough to jump the language barrier and be published in English. But it was just rather dry and boring for me. I’m assuming that something was lost when it was translated, however, and if that’s the case, that’s a real shame. The story is just a little too much of listing the names of people and places instead of action.

Then there’s the whole magic aspect. Light Perpetual is billed as a book full of sex, death, and magic and while there was plenty of death, there was very little sex and next to no magic. There is some magic but everyone is so afraid of being called out for practicing magic that they are too afraid to use it. Some characters use a little more but it was still not the magic-filled tale that I was expecting.

Sapkowski’s tale is a very slow build. It takes quite a while for anything at all to really happen. It does pick up eventually but you have to be willing to endure a lot of geography and roll calls first. Once it does begin picking up there are new characters constantly coming in to help and hinder Reynevan on his journey.

It is funny to see how everyone treats him. He is obviously a respected and feared man. He has made a name for himself thanks to the places he has been and the battles he has influenced. But it is not quite enough of a name to get him what he wants without a fight. There is always someone trying to stop him in order to better their own position but there is also always someone willing to help him because of karmic debt.

A story for certain tastes

If you are into historical fiction this book is going to make your day. Ditto if you like war novels. If you’re one of those people who love it when these two genres collide then get ready for a party. Sapkowski fits Reynevan and magic into the Hussite War pretty well. The account reads like something that could be true. But if you don’t have the patience for a slow-burn read then this probably won’t interest you. Personally, it wasn’t the worst I’ve ever read, but I have definitely read better.

It’s important to remember that Light Perpetual is the third book in Sapkowski’s Hussite Trilogy. If you do decide to read it you absolutely need to read the first two, The Tower of Fools and Warriors of God. Both have already been translated into English.

Events and characters from the first two books are constantly being referred to in Light Perpetual and they have a lot of bearing on the plot. I guarantee that you will feel lost without the background provided by the first two installments. The characters all have strong feelings towards each other because of events in the beginning of the series. Knowing these events is key to understanding why certain characters do what they do and respond in specific ways. So if you read Light Perpetual make the time to read The Tower of Fools and Warriors of God first.

Light Perpetual by Andrezej Sapkowski is available now from Orbit Books. Have you read the novel? What are your thoughts on it? Let us know on social media. If you haven’t already, check out my other latest book review, Squirrel Girl Universe: A Marvel Heroine Novel!