On Tuesday, October 25th at 6:30pm in Sundquist Science Complex, Room 106A/B, she’ll lead a presentation about her research and how it might explain not only John Bell’s death but also some of the magical components at the core of the legend.

“Some of this stuff just seemed outright magical,” Mann said. “But a lot of it has kind of a chemical background. I’m hoping that people can see this old and magical case through new and scientific eyes.”

The event is free and open to the public, and festive costumes are recommended. 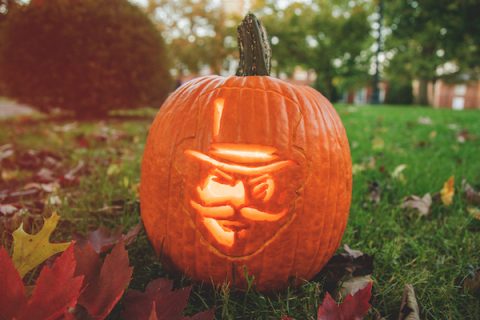 The 38Th Annual Percussion Ensemble Halloween Concert will be on Friday, October 28th at 6:00pm and 8:00pm in the Mabry Concert Hall. Admission is two cans of food, donated to Loaves & Fishes, or $5.00.

The music on this year’s program includes the usual list of Halloween suspects, including works from “Casper the Ghost,” “The Addams Family,” “The Munsters,” “Dracula,” “The Wolfman,” “Frankenstein” and even a little music from “Stranger Things.”

There will also be percussion music from Alexander Lepak (Crescendo), Cy Miessler (Imminent Slaughter), and Chris Crockarell (Noises On). For those with more refined taste, the evening will feature music by Gustav Mahler (Urlicht) and Wolfgang Amadeus Mozart (The Queen of the Night Ah-ria).

Guests include singers Dr. Penelope Shumate, Megan Jacobs and Allison Steinquest; guitarist Dr. Stanley Yates; and the Friendly Ghost Singers. Of course, the program would not be complete without a visit from Chris Brooks and Chris Crockarell, the Row-Loff Boys!

GHOST (Greater Halloween Options for Safe Trick or Treating), hosted by the APSU Student Government Association, will once again take place this year on the interior of the Austin Peay campus, Sunday, October 30th, from 2:00pm to 5:00pm. The event is free and open to the public.

Annually over 60 organizations and departments participate in the event providing candy, games, and books to children.

Most tickets are $22.50-$25.00, but Austin Peay State University students get in free with an ID (non-APSU students have $5.00 tickets). Tickets can be purchased at the Clarksville Community Concert Association website.

Retired Lt. Gene. Charles Hooper will speak at “The US-China-Russia Great Power Competition” on October 25th from 5:00pm until 7:00pm at the Mabry Concert Hall at Austin Peay State University. The presentation is part of the Institute for National Security and Military Studies Speaker Series.

Sara Beth Urban, president, and CEO of HospitalityTN, will speak on Wednesday, October 26th at 11:00am, in Kimbrough Building Room 219, as part of the Legends Bank Legends of Business Speak Series hosted by the College of Business.

Multidisciplinary artist Chris Friday’s “One More River” will run through October 28th at The New Gallery in the APSU Art + Design building. Friday’s work offers itself as a contemplative reflection of and counternarrative to the pervasive under/misrepresentations of Blackness in mainstream media and popular culture.