You never know where life will take you. Manhasset author Elena Schietinger understands this wisdom well. From an early career in journalism in the 1980s, to a 25-year stint as a New York State Administrative Law Judge, to her current position as the founder of a mediation and arbitration firm, all while caring for her family, Schietinger has had a wealth of life experience.

“I always told my kids, you will travel the paths that you’re supposed to travel, and sometimes they come up unexpectedly.” Schietinger said.

Now she has come full circle back to writing. Even her path there has been unconventional; her children’s books were written when her children were attending Shelter Rock Elementary School in the ’90s. Her boys and their classmates were often her test audience. Once her children outgrew the books, she stowed them away. “They sat in a box in a closet. my husband found them when the boys were away at school and encouraged me to offer them to a wider audience.” 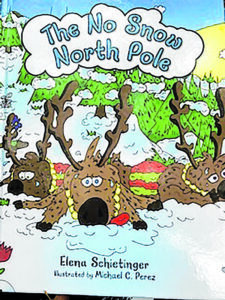 It was never her ambition to be a published author. Her life was very full, and there was no room for a writing career early on. “Maybe if I didn’t have a full-time job and a very different career, I would have said, ‘Oh, well, maybe I can do something with this.’ But, you know, I just, it was never my intention to publish children’s books, it was my intention to write because I loved it and to entertain the kids.” Instead, these stories were meant to show her children her love and help them work through their struggles. There’s A Spider In My Closet teaches children to manage fear by confronting it. I Know You Can Do It, You Know You Can, Too! encourages readers of all ages to believe in themselves. How The Goldfish Got Its Name is a fable about kindness, humility, friendship and cooperation.

Published by Archway, a division of Simon and Schuster, the books feature various illustrators. Initially they were sold online, but they have since been picked up by Target, Walmart, and numerous independent bookstores throughout the US. They have also been translated and are sold worldwide. There’s A Spider In My Closet is being made into a children’s production by a Long Island theater company.

Recently, the author was awarded Certificates of Excellence in Children’s Literature for all three of her children’s books in the 2022 Purple Dragonfly Book Competition. There’s A Spider In My Closet, How the Goldfish Got Its Nameetc I Know You Can Do It, You Know You Can, Too! were recognized in the category of “Picture Books, Age 6 and Older.” How the Goldfish Got Its Name also received Honorable Mention in the general Category of 2022 Children’s Literature and There’s a Spider In My Closet was recognized in New Author of Fiction. The worldwide competition began in 2009 with a goal of celebrating the best in children’s books across 57 categories.

Schietinger was thrilled to be honored. “It’s very gratifying. And it’s just an amazing gift. Because it’s not at all something that I set out to do. it’s a path that I never expect to take.”

Her advice for aspiring children’s book authors is simple: “I would say to anyone who writes, just go for it. You know, believe in yourself. That’s what the second book I Know You Can Do It, You Know You Can, Too! is all about, believing that anything you really dream of accomplishing, you can accomplish. So go for it. you’ve really got nothing to lose.”

Two new books are expected from Schietinger in 2022. The No Snow North Pole is currently in production and I Can’t Catch That Fish! He’s My Friend, Don’t You See? Should be released by year’s end. She is also writing two novels. She has resided in Manhasset with her family for more than 20 years.