Peeking over walls and nestled in Fulham’s South Park conservation area is Sands End Arts and Community Center, an honest and adaptable building, designed for programme flexibility, longevity and a circular material economy. The RIBA Stirling Prize-nominated project by Mæ Architects is one of many projects included in Ruth Lang’s new book, Building for Change: The Architecture of Creative Reuse. The book not only showcases an abundance of carefully crafted projects, but functions as an accessible guide to key principles of reuse for clients, architects, developers and contractors.

The construction industry, Lang explains, is set up in such a way that the construction and turnover of new buildings is easier and more profitable than retrofit. Generally, developer’s motivations are incongruous with the fundamental qualities of reuse, such as material innovation and longevity, but this ignores the potential for reduced operational expenditure in the long term. Lang argues that to engage meaningfully with creative reuse, a dismantling must occur. ‘This dismantling is literal in terms of the projects themselves,’ she writes, ‘but also applies figuratively to the frameworks of practice and procurement, planning policy, and building control in which the construction industry currently operates.’

A highlight project is the rehabilitation of the Caritas Psychiatric Center in Melle, Belgium, by Architecten De Vylder Vinck Taillieu (DVVT), a hospital turned public space that the architects approached as a project of revitalization and augmentation, giving agency to future users in how spaces are transformed and used. Lang also explains how the narrative of growth and reuse was important. ‘DVVT shows how cracks don’t have to be covered up and hidden but can be celebrated as part of an ongoing history,’ she says. Her vivid descriptions bring life to the idea that retrofit can be vibrant, inventive and responsive.

The book comes at a time of growing concerns and activism over the cavalier attitude towards reuse and its social and climate benefits, highlighted by events such as Birmingham’s Retrofit Reimagined festival hosted by Civic Square. The book also shows that reuse can and should be thought of as a process that engages with communities; enlivening the users of the building as much as the building fabric.

But it also acknowledges the political barriers, concerns of risk and responsibility, and the knowledge gaps that exist within various sectors. Without support, there is limited incentive for retrofit on a grander scale. One would think that the government’s push for historic conservation of statues would extend to the nurture of our built environment rather than a continuous process of demolition and building anew. 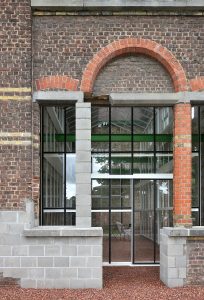 The book carries an inherently poetic notion of designing through reuse. What may be perceived as architecture speak or idealization is really an appreciation for retrofit as practice of care rather than a systemized process of repair. Building for Change highlights the key issues and ways of propagating reuse as a socially and economically viable building practice.

After reading, I concluded that if ‘demolition is an act of violence’ then retrofitting and reuse can be seen as an act of reparation, giving back to and maintaining communities that rely on and value these spaces. But practices of reuse must also engage with tensions between sensitive reuse and factors such as access – where the maintenance of existing spaces does not also maintain the inequities sometimes embodied in them.

Building for Change: The Architecture of Creative Reuse by Ruth Lang. Published by Gestalten. HB 256pp