Members of the African diaspora last week transformed USC’s Bing Theater into a showcase of traditional Nigerian music, culture and folklore as they gathered from around the world to watch Wedlock of the Godsdirected by Bayo Akinfemi, assistant professor of theater practice.

The production, which premiered in time for Nigeria’s Independence Day on Oct. 1, featured a nearly all-Black cast of students from the USC School of Dramatic Arts, eager to bring to life the work of celebrated playwright Zulu Sofola.

Wedlock of the Gods tells the tale of a young widow whose family forced her into an arranged marriage to secure the funds to save the life of her sick brother. (Photo / Craig Schwartz)

The audience was in full conversation with Sofola’s material as the students’ dramatic portrayals of the playwright’s characters – along with the vibrancy of the costumes and the set, which transformed the theater into a post-colonial Nigerian village – drew laughter, snaps, gasps and clucks of disapproval.

The play tells the tale of Ogwoma, a young widow whose family forced her into an arranged marriage to secure the funds to save the life of her sick brother. Two months after Ogwoma’s husband dies – still within the required three-month mourning period enforced on widows – she becomes pregnant by the love of her life, Uloko. Odibe, Ogwoma’s mother-in-law, makes it her mission to punish the young couple for disgracing her dead son. Likewise, Ogwoma and Uloko’s parents urge them to abandon their love to avoid bringing shame to their families. The couple’s staunch defiance draws the ire of the entire community, with tragic results.

Wedlock of the Gods: Special significance for Akinfemi

Bringing Sofola’s play to the USC stage had special significance for Akinfemi.

Sofola, Africa’s first female professor of theater arts and Nigeria’s first female published playwright and dramatist, served as a mentor to Akinfemi, who was part of the last cohort of theater students Sofola taught at the University of Ilorin in Nigeria before her death in 1995.

Akinfemi said he had a very special relationship with Sofola, who he and many of his peers referred to as “Mama” because of her devotion to her students. 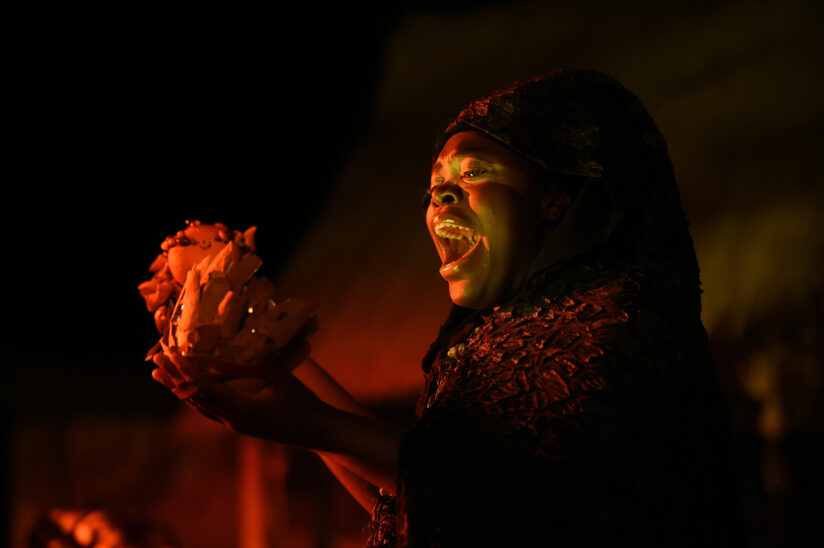 The production of Wedlock of the Gods premiered in time for Nigeria’s Independence Day on Oct. 1. (Photo / Craig Schwartz)

“She was a mother in the true sense of the word and went beyond the call of duty as the head of our department,” Akinfemi said in an interview before the show. “My personal connection with this woman makes me really proud and hungry to put her work here in this space for everybody to see.”

Bringing Wedlock of the Gods to one of USC’s main stages aligned with Akinfemi’s greater mission to create more opportunities for artists from the African diaspora.

When Akinfemi arrived in the United States more than 10 years ago, he struggled to secure acting opportunities in an industry that failed to envision him in roles beyond those where he played a servant or served as the butt of jokes. Though the connections he made during his master’s degree studies at the USC School of Cinematic Arts and beyond have served him well: He now has a joint, full-time appointment in both USC Cinematic Arts and USC Dramatic Arts and serves as an actor, cultural consultant and occasional director on the CBS sitcom Bob Hearts Abishola. 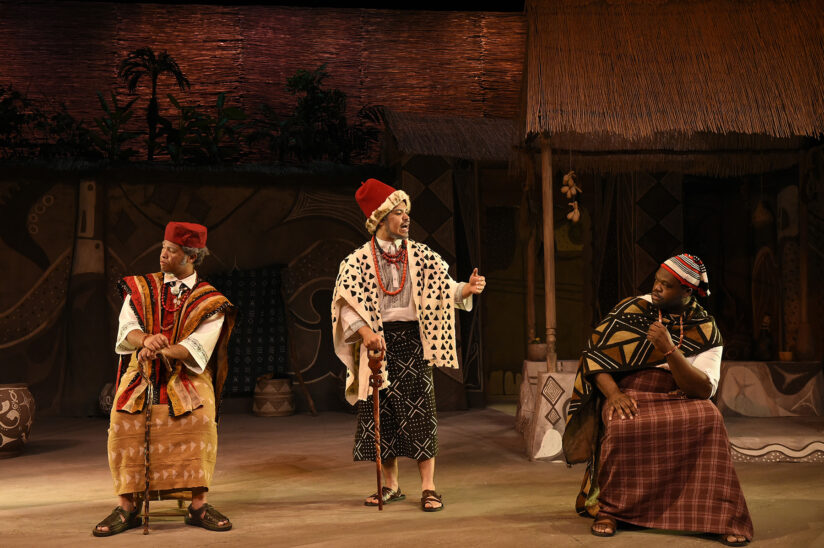 “I want to introduce something different, not only to the USC community, but also to the larger Los Angeles community, California and America,” he said. “I’m just so glad that USC was open to this idea and this experience not only for me, but for the students and the crew.”

USC Dramatic Arts Dean Emily Roxworthy attended Friday’s showing and spoke to how the production and Akinfemi’s mission further the university’s goal of deepening its engagement with its surrounding community.

“Since arriving at USC, I’ve been so impressed by President Carol Folt’s vision of USC as a private university with a public heart,” Roxworthy said. “To be able to honor the legacy of Zulu Sofola and everything she’s meant to Nigeria and Africa and to bring that to our stage and enable our students to have the experience of working on a play like this is really important. The mission of the School of Dramatic Arts is to change the face of the entertainment industry, and that includes the stories that are told on our main stages. “

“Art, film and theater have this unique power to not only showcase what the world is, but also mirror what the world could be,” Baker said. “When audiences are used to only consuming a certain type of media that has this image of what Africa is – especially what we’ve seen in the past that can be harmful – that could perpetuate harmful narratives and stereotypes. That’s why it’s so important to have our African stories that are showcased in the most authentic way possible by African storytellers. “

Third-year MFA student Levonte Herbert played Ibekwe, Ogwoma’s father. For Herbert – who turned to acting as the only creative outlet that could hold his interest after careers in boxing and the Marines – working with Akinfemi was an opportunity to lose himself in a world he knew little about before. “It was a blessing to have a director who was from that world, because I didn’t have to go to Google to do the research,” Herbert said. “He was the cheat code and had so much to offer, whether it be about the character or the story or something else I wasn’t getting.”

After the play, Sofola’s children joined Akinfemi for a heavily attended “talk back” with the audience, during which USC students and attendees explored the main themes of the play and the impact of seeing African stories told on one of USC’s main stages.

From the start, Akinfemi centered the discussion on the play’s major theme of female empowerment, as traditional gender roles and stigma around female bodily autonomy clash with personal freedom.

Even though it’s fictional, these issues are still very relevant to what’s going on in the US and as far as Iran right now.

“This play is about a woman fighting for independence from a patriarchal oppression,” Akinfemi said. “Even though it’s fictional, these issues are still very relevant to what’s going on in the US and as far as Iran right now, and I want this to be at the forefront of the conversation.”

Sofola’s children commended USC for showcasing their mother’s play and shared how her unique upbringing in a family that recognized her potential belied traditional views on women’s role in Nigerian society in the 1950s. The playwright’s three living sons and daughter shared stories about how Sofola’s grandfather made the then unusual decision to send her to study in the United States at the age of 15, and how years later her husband would wait in his car in front of the university where she taught until 4 in the morning, to make sure she was able to finish teaching her students and get home safely.

Students in the audience discussed how seeing USC support authentic, Black storytelling with a strong female lead helped them see themselves in future productions and stressed that creating spaces like this helped them believe they could have a voice within the USC School of Dramatic Arts.

When asked before the show what she wants audience members to carry with them after watching, Baker said, “I want people to just be eager to ask questions. I want people to be more excited for future African-centric stories and narratives, and for people to open their eyes, hearts, and ears to new, diverse storytelling. “

At the end of the talk, Akinfemi stood up and asked the audience to raise their hand if this was their first time attending a play at USC. Nearly everyone in the theater raised their hand. When he asked how many would return to see another production, the same majority raised their hand and joined in a round of applause.