Post Malone gets a new tattoo! The singer has baby daughter’s initials DDP tattooed onto his FOREHEAD backstage at concert

By Sameer Suri For Dailymail.com

He is known for his prodigious spread of tattoos.

And Post Malone – real name Austin Richard Post – added another piece of body art to his collection Sunday night – this time with a special family significance.

Tattoo artist Chad Rowe revealed he has applied new ink to Post’s forehead reading: ‘DDP,’ which TMZ reports are his baby daughter’s initials. Post, 27, welcomed his little girl earlier this year but has not shared her name.

‘I love you all’: Tattoo artist Chad Rowe revealed he has applied new ink to Post Malone’s forehead reading: ‘DDP,’ which TMZ reports are his baby daughter’s initials

Chad broke the news on Instagram, uploading a close-up shot of Post with the fresh new ‘DDP’ tattoo splashed across his forehead in a Gothic font.

‘It really doesn’t ever feel real. And for the trust of such and important tattoo is a huge honor, ‘Chad gushed in his caption.

‘Thanks for being such an amazing person, artist, and friend, Austin. I’m so blessed to not just have a “once in a lifetime“ opportunity, but to have a lifetime of opportunities. And to share it with my favorite people. ‘

Now insiders have informed TMZ the ink was applied backstage at Post’s Indianapolis concert after the show was over. 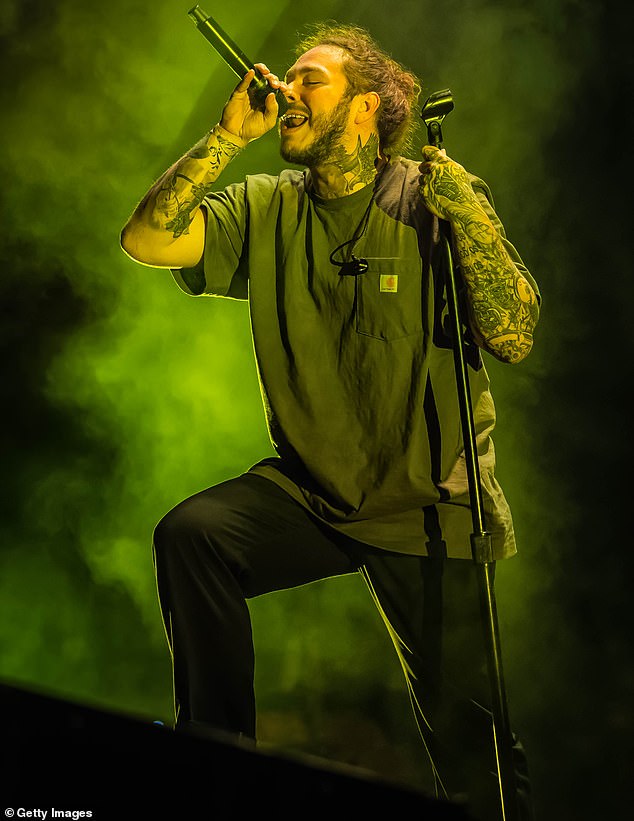 Throwback: Now insiders have informed TMZ the ink was applied backstage at Post’s Indianapolis concert on Sunday; he is pictured playing Indianapolis in 2018

Chad, whom he turned to for his new body art, was also evidently the man behind the tattoos under Post’s eyes reading ‘Always Tired.’

Post has been assiduously private about his love life, but he did announce in May that he was about to become a father.

‘I’m excited for this next chapter in my life, I’m the happiest I’ve ever been, and for since I could remember I was sad,’ he rhapsodized to TMZ. ‘Time to take care of my body and my family and friends, and spread as much love as we can every day.’ 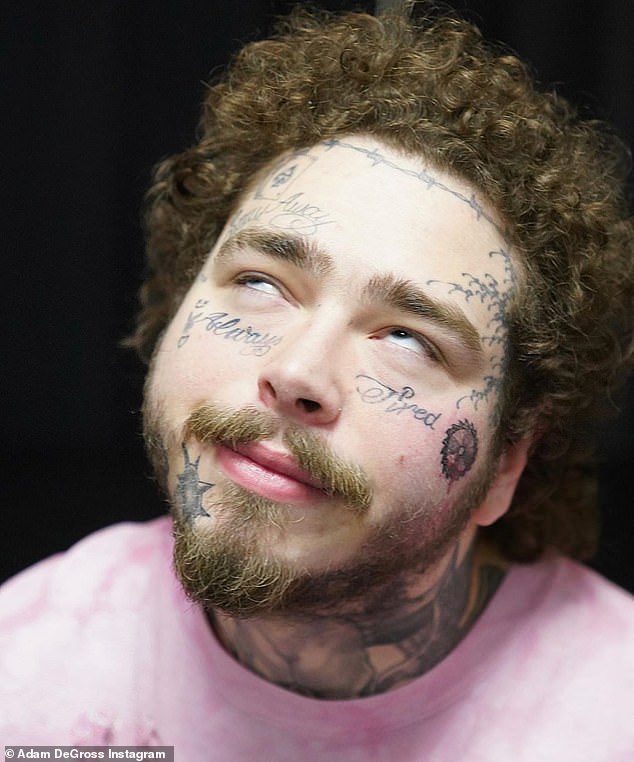 By the way: Chad, whom he turned to for his new body art, was also evidently the man behind the tattoos under Post’s eyes reading ‘Always Tired’

He shares his little bundle of joy with his fiancée, and has yet to publicly disclose either the baby’s name or her mother’s name.

Post let slip on The Howard Stern Show in June that his fiancée, who helped him overcome his alcoholism, had given birth.

In a recent GQ interview he shared that although fatherhood has been ‘great,’ he has found it difficult to be away from his baby while touring. 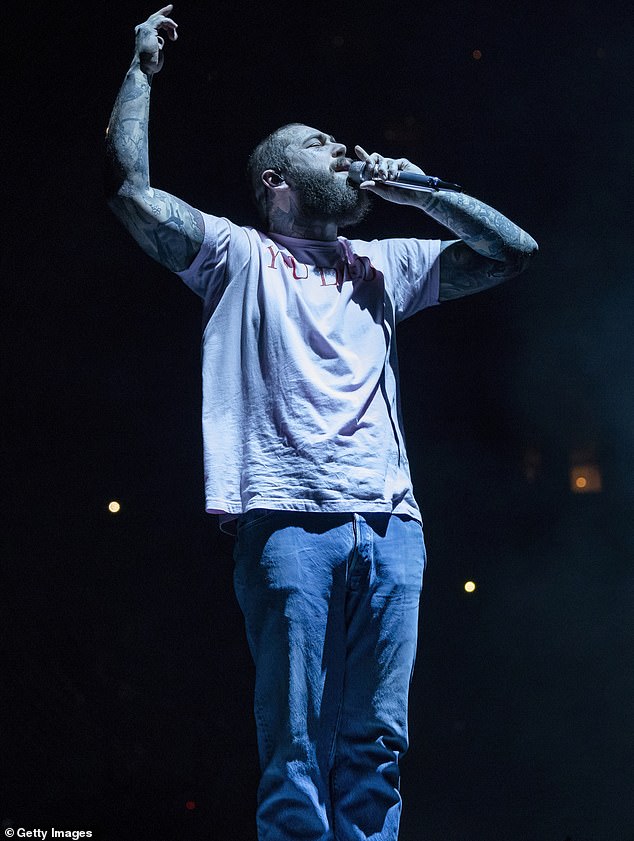 On the road again: In a recent GQ interview post shared that he has found it difficult to be away from his baby while touring; he is seen playing Detroit last week

‘It’s really tough not being able to see her, but she’s coming out more often now. She’s huge, she’s super tall, and she’s such a legend and I’m just happy to see her. But it is heartbreaking having to leave and not be able to be with her all the time. ‘

He said lovingly that his daughter is’ so swaggy. We got her overalls, Realtree camo everything, some nice hoodies, some zip-ups. She’s so cool. She’s way cooler than me but she definitely took a little inspiration from me. ‘

Post has however been taken aback by her ‘blowouts. She will blow out sometimes and it’ll come right outside of her pants. The poop will just be dripping out and I’m like: “What the hell happened?” That’s how I know it definitely is my daughter – not that I have blowouts, but that I know my way around a toilet. ‘