The highlights this week: Sensitive UN political missions plod ahead across the region, Ecuador restructures its debt to China, and Mexico hosts the annual Indigenous and Traditional Games.

If you would like to receive Latin America Brief in your inbox every Friday, please sign up here.

Set against the backdrop of war in Ukraine and painful strains on food and energy supplies, this week’s United Nations General Assembly has been accompanied by stronger-than-usual criticism about the body’s ineffectiveness at addressing major international issues.

But the UN’s high-level stagnation is not the whole story. The organization also runs many smaller missions that support conflict-resolution and justice efforts in specific countries, including several in Latin America. Although they don’t always make headlines, these UN projects often serve as important arbiters.

Colombia offers one example. UN monitors were critical to the rapid demobilization of guerrilla fighters after the country’s 2016 peace agreement with the Revolutionary Armed Forces of Colombia (FARC) was signed. Today, the UN mission in Colombia is assisting new President Gustavo Petro’s efforts to explore a demobilization deal with other guerrilla fighters who sat out of the negotiations six years ago.

The mission’s “fundamental legitimacy and strength comes from the fact that both sides [of the 2016 peace deal] called for it to be there,” the International Crisis Group’s Ivan Briscoe told Foreign Policy. Even when Iván Duque—who had been opposed to the deal and was resistant to putting his full support behind it—took Colombia’s presidential office in 2018, the mission found a way to continue its work and preserve its legitimacy, Briscoe said.

In Honduras, UN envoys are currently in talks with President Xiomara Castro’s government about opening a special anti-corruption commission in partnership with local prosecutors and judges. A similar UN-backed commission was founded in Guatemala in 2007, and Castro had pledged to establish one in Honduras when she campaigned for the presidency late last year.

A previous Organization of American States (OAS)-backed effort to install an anti-corruption commission in Honduras in 2016 was short lived, and its mandate was allowed to expire under Castro’s predecessor, Juan Orlando Hernández, who was extradited to the United States and charged for drug trafficking this year.

For such a commission to be effective, analysts have argued, it must be free from political inference. Although Guatemala’s commission revolutionized anti-corruption work in the country over the course of about a decade, then-Guatemalan President Jimmy Morales shut it down in 2018—when it began to investigate him. Castro and the UN are negotiating just how much independence the commission will have; for example, UN envoys have hesitated at her proposal to allow her administration to choose its investigators, El Faro reported.

“Castro’s challenge lies in keeping [her party’s] nose out of the judiciary,” El Faro‘s Roman Gressier wrote. If the commission moves forward with independence, it will amount to “[swimming] against the current … in a region whose courts and top prosecutors … have become subservient to the sitting governments.”

Meanwhile, a UN fact-finding mission on Venezuela this week released a new report documenting government forces’ torture and rape of detainees from 2014 to the present and tracing the human rights abuses to plans orchestrated “at the highest levels of the government.” Last month, 125 Venezuelan and international civil society and human rights groups praised the UN mission and called for its renewal, writing that it has “advanced a search for truth, justice, and reparation.”

The groups called the UN mission’s work complementary to stalled negotiations on Venezuela’s political crisis, writing that its recommendations identify problems that must be addressed in the talks—whenever they resume.

Current UN missions in Latin America do not always garner this kind of praise from local human rights groups. In Haiti in particular, some civil society advocates have fiercely criticized the UN mission there—which has a mandate to enforce political stability, peace, and human rights—for continuing to back unelected Prime Minister Ariel Henry as the country has experienced violent unrest in the wake of former President Jovenel Moïse’s 2021 assassination.

Still, the aforementioned UN efforts in Colombia, Venezuela, and Honduras are providing support for peace and justice work in ways their polarized host societies would not be able to do alone.

Saturday, Sept. 24: The foreign ministers of the BRICS grouping of Brazil, Russia, India, China, and South Africa are slated to meet on the sidelines of the UN General Assembly.

Sunday, Oct. 2: Brazilians vote in congressional elections and the first round of the presidential election.

Disaster anniversaries. Mexico and the Caribbean were pummeled by natural disasters on the anniversaries of previous tragedies this week. A magnitude 7.6 earthquake hit Mexico on Sept. 19, the same day as the disastrous 2017 and 1985 earthquakes, while Hurricane Fiona ravaged Puerto Rico, the Dominican Republic, and the Turks and Caicos Islands on the five-year anniversary of Hurricane Maria.

Bukele on the ballot. Salvadoran President Nayib Bukele said last Thursday that he plans to seek reelection in 2024, an announcement that surprised few. El Salvador’s constitution prohibits presidential reelection, but last year, a panel on the country’s Supreme Court—then recently stacked with pro-Bukele justices—ruled it should be allowed. At the time, the US State Department was among those publicly criticizing the ruling.

The announcement also prompted a letters from a forum of former Latin American and Spanish leaders that urged the OAS to take measures to “promote the normalization of democratic institutionality” in El Salvador, invoking the OAS’s charter on democracy.

Pause the soccer talk. Mexico’s national Indigenous and Traditional Games took place this month in the state of Sonora, pitting 500 Indigenous athletes against one another in 125 games and sporting activities. It was the 23rd such annual meeting.

While some games played at the event involved physical tools—such as balls, gloves, and hockey-like sticks—it also featured mountain running and “mental skill games,” such as contests in how to plan for the harvest. Researchers attended the events to better understand how some of them were connected to Indigenous spirituality, organizer Ana Claudia Collado García told EFE news agency.

One of the sports played at the event was ulama, where players hit a heavy rubber ball back and forth using their hips. The pre-Colombian game was played across ancient Mexico and Central America and has enjoyed a revival in Mexico over the past decade, during which Mexico City even opened an ulama court. This month’s competition featured Mexico’s second national ulama tournament.

Which of the following guerrilla groups had already gone defunct by the time of Colombia’s 2016 peace agreement?

Petro belonged to the group before it was demobilized in 1990. The PCC is from Brazil, while Los Pelusos and the ELN are Colombian.

FP’s Most Read This Week

• Kazakhstan Is Breaking Out of Russia’s Grip by Temur Umarov

• Ukraine Put Putin in the Corner. Here’s What May Happen Next. by Amy Mackinnon, Robbie Gramer, and Jack Detsch

• What Russia’s Elites Think of Putin Now by Tatiana Stanovaya 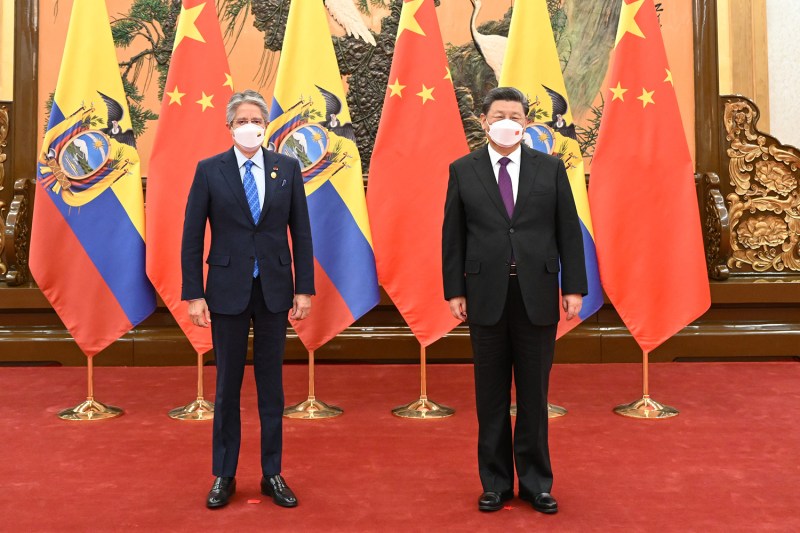 Ecuadoran President Guillermo Lasso said on Monday that his country had reached a deal with Beijing to restructure Ecuador’s debt to China. Lasso has sought such a restructuring since early in his presidency, which began last year, and traveled to Beijing in February to pursue it.

During the 2007 to 2017 presidency of Rafael Correa, Ecuador took out billions of dollars in loans from China under terms that were opaque to the public, drawing criticism. By this February, Lasso said Ecuador’s outstanding debt to China was $4.6 billion.

Under the new deal, Ecuador will have three more years to pay back its debts to two Chinese state banks, now due in 2027 and 2032, and will also owe lower interest rates on those payments. Lasso said the deal would free up $1.4 billion that would otherwise be spent on debt repayments by 2025. Ecuador also owes China barrels of oil as part of a separate debt, and last week, Ecuador announced China would allow a delay in scheduled deliveries. This will grant Ecuador some additional $709 million in oil revenue through 2027, the country’s state oil company said.

“This looks like a fairly standard rescheduling,” the Council on Foreign Relations’ Brad Setser tweeted about the news. “Necessary, but not earthshattering.”

Lasso celebrated the deal, and economic analyst Alberto Acosta-Burneo told Bloomberg that it was significant not only for providing short-term relief but also because it represented a “relaunch of the relationship with China” and could even pave the way for a new credit line from China in the future. Ecuador is on a tight repayment schedule to the International Monetary Fund and may have trouble borrowing on international capital markets because of its poor rankings from credit agencies, Bloomberg noted.

China has now carried out post-pandemic debt extensions in several countries, but it has rarely done so in cooperation with other creditors. The sheer scale of Chinese lending to developing countries has prompted scholars, such as Ulrich Volz at SOAS University of London, to call for a more multilateral approach to Chinese debt restructurings.