The Danville Area Community College Board of Trustees passed their Fiscal Year 2023 $ 18 million budget this past Thursday night, about a two percent increase from last year. DACC president Dr. Stephen Nacco says it’s a solid, balanced budget, but the next couple years could be a bit challenging.

AUDIO: It’s really hard to prognosticate. But, we don’t know what utilities and health care will do in the next year. So, those are the two variables that are giving us pause, before we look at the year and what we need to do. Enrollment going up helps, but that’s not going to offset what could be seriously high increases in electrical. But, we’ll see.

Most of Thursday’s meeting was taken up by the volleyball issue. It’s a sport canceled at DACC in both 1983, and again in 2013. But there’s lots of push from area players and coaches to bring it back. Athletic Director Tim Bunton says if the DACC Board makes the decision to do so, they should do it the right way by taking their time. In his eyes, that would mean don’t play a schedule until 2024, and use the time to get a full time coach, and get everything organized. He says a major reason for doing that is if a potential student-athlete comes in and sees a rushed, disorganized situation, that can be a turn off. 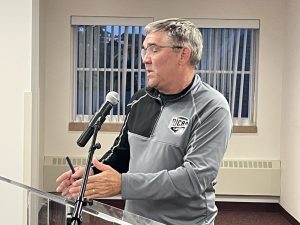 (Left) Stateline Pride Volleyball Club’s Nicole McFarland states her case for volleyball reinstatement at DACC. (Right) DACC Athletic Director Tim Bunton explains his reasoning for starting volleyball in the fall of 2024, if it is reinstated.

The DACC Board will likely have a discussion session on the volleyball issue sometime in October, and then take a vote at the next Board of Trustees meeting.

Finally, two DACC presidential scholars; Salt Fork High School graduates Naomi Dolan and Autumn Lang, spoke at the meeting to thank the board about scholarship opportunities at DACC giving them a huge advantage. Lang also spoke about the Three-Plus-One Program, allowing her to stay at DACC for a third year of courses, and then take a fourth year of online courses at a school participating in the program. 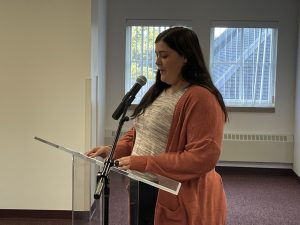 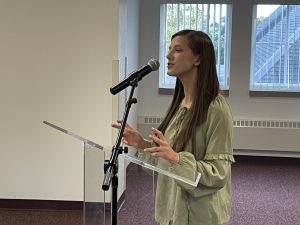 Salt Fork High School graduates and Presidential Scholars Autumn Lang (left) and Naomi Dolan (right) thank the Board of Trustees for the opportunities they have had at DACC.

AUDIO: The Three-Plus-One program was kind of something that I had no clue about until I stepped on campus; and soon realized it was going to be a huge help for me in my life.

Dolan says her connection to DACC started a decade ago, participating in the summer College for Kids program.

AUDIO: I started doing College for Kids back in 2012. At the time it was pretty much a full day thing. You would choose three classes on a variety of topics. I took everything from learning about space to learning about ancient Egypt. 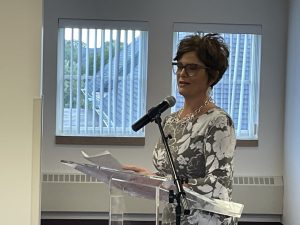 DACC Foundation executive director Tonya Hill addresses the Board of Trustees about the amount of scholarships able to be provided to DACC students.

DACC Foundation executive director Tonya Hill spoke as well, saying DACC’s graduation rate of 43% is largely due to scholarship opportunities available for students because of those who care.

AUDIO: Oh absolutely; and we are happy in the foundation to be able to raise the money with our generous donors in this community to help those students get through with little to no financial debt.

The next DACC Board of Trustees meeting will be one week early; on Thursday October 20th.