A new discovery means scientists are one step closer to understanding the mysterious environment of the Milky Way’s supermassive black hole.

Astronomers around the world have been working together to capture images of black holes to better understand them.

As part of this, they recently detected a hot gas bubble swirling around the black hole, called Sagittarius A *.

They say their findings seem to support some the theories they’ve been working on trying to prove.

What is a black hole?

Black holes are formed when a dying star collapses inward under the pressure of its own weight. This leads to something called a supernova, a star’s extremely powerful explosion.

Black holes are places in space where the pull of gravity is so strong that even light can’t escape it! This is what makes them invisible.

Supermassive black holes are millions, or sometimes even billions the size of our Sun. Astronomers believe they can be found at the center of all large galaxies, including our own: The Milky Way. 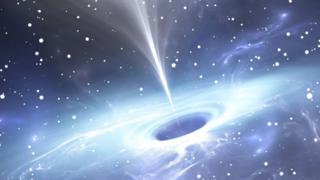 What are the latest observations and what do they mean?

The observations suggest that this gas bubble is on an orbit similar in size to that of Mercury’s orbit around the Sun.

It travels much faster though – Mercury takes 88 days to complete its journey while this gas bubble takes around an hour to travel around the black hole.

Maciek Wielgus of the Max Planck Institute for Radio Astronomy in Bonn, Germany, said: “We think we’re looking at a hot bubble of gas zipping around Sagittarius A * on an orbit similar in size to that of the planet Mercury, but making a full loop in just around 70 minutes.

“This requires a mind-blowing velocity of about 30% of the speed of light.”

This wasn’t the only observation they made though.

Some of the images they captured with a special radio telescope – called the Atacama Large Millimetre / submillimetre Array (ALMA) – were taken shortly after a flare of X-ray energy burst from the center of our galaxy.

These are thought to be associated with so-called hot spots which are hot gas bubbles which orbit very fast and close to the black hole.

The scientists have used both of these observations to learn more about the formation of these hot spots and the magnetic field surrounding the black hole.

They believe their research will help to narrow down what magnetic fields around black holes can look like, which is helping other astronomers uncover the nature of Sagittarius A * and its surroundings.