Rabiu Kwankwaso on Wednesday, September 21, benefitted from one of his good works which he did close to 20 years ago.

The former governor of Kano via his Facebook page on Wednesday shared photos of himself and two pilots, Captain Muhammad Mahi Sunusi and Senior First Officer Aminu Muhammad Usman.

Kwankwaso said back when he was the governor of Kano, the duo was among those who were beneficiaries of his scholarship scheme in the state. “Incidentally, the two pilots that flew my flight to Abuja today, Captain Muhammad Mahi Sunusi and Senior First Officer Aminu Muhammad Usman, were among the 100 Pilots who benefited from the scholarship scheme during my tenure, as Kano state governor.”

Meanwhile, four candidates contesting in the 2023 general election on the platform of the New Nigeria Peoples Party (NNPP) in Osun state have declared support for the presidential candidate of the All Progressives Congress (APC), Senator Bola Tinubu.

The candidates made the move known while addressing the media in Osogbo, Osun state capital, on Wednesday, September 21.

The NNPP candidates attributed their decision to dump the party’s presidential candidate, Senator Rabiu Kwankwaso, for Tinubu to a lack of transparency in the running of their party at the national level. 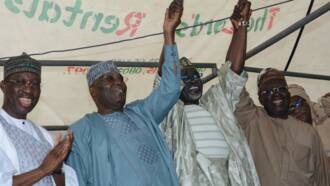 Addressing the media in Osogbo on behalf of other candidates, Bamigbola said:

“In view of the prevailing circumstances within our party and after due consultation and approval of our supporters, we wish to announce and declare our support and endorsement to the All Progressives Congress presidential candidate, Asiwaju Bola Tinubu.

“This is as a result of our dissatisfaction with the leadership of the party at the national level, coupled with the inability of the party stakeholders to work in accordance with the principle of justice, law, and undemocratic running of the party.”