— Many schools in the region will not allow their staff or teachers to carry guns, relying mostly on resource officers from local police departments.

— Millions of dollars from the state have been given to districts to improve safety initiatives.

— Some students feel safe in school, while others have past school shootings in the back of their minds as they take classes.

— Many schools have mental health supports for students who are worried or struggling.

Teachers at the Mad River and Sidney schools can carry guns this upcoming school year – if the Ohio School Safety Center approves the districts’ training regimens.

This follows Ohio passing a new law allowing teachers to carry weapons in schools, if they are registered with the new Ohio School Safety and Crisis Center, through the Ohio Department of Public Safety.

The new law has been controversial. The two major Ohio teachers’ unions – the Ohio Federation of Teachers and the Ohio Education Association – issued a joint statement opposing the bill before it was signed in June.

The DeWine administration also has been criticized for not doing more to take guns out of the hands of criminals.

Govt. DeWine noted much of the focus and attention in the law that allows teachers to carry weapons in schools has been on arming teachers but said there are other factors that go into safety.

“Again, while a lot of focus, understandably, has been on this, all the other things that you do every day to keep kids safe are frankly a lot bigger than that,” DeWine said at the Ohio School Safety Summit, an annual conference on school safety held last week.

Schools saying no to guns

Many school districts surveyed by the Dayton Daily News said they did not plan to arm teachers this year.

The board of education for Dayton Public Schools, the largest district in the area, passed a resolution saying they will not arm teachers in the district.

“The Dayton Public Schools Board of Education believes that the presence of firearms would create a dangerous environment in our schools and threaten the lives and safety of students and staff,” the resolution read in part.

The resolution added, “The Dayton Public Schools Board of Education believes that teachers and other educators in our schools, who educate, mentor and nurture their students should not be asked to arm themselves with deadly weapons in a misguided attempt to make their students safer. “

And other large districts, including Beavercreek, Springboro, Oakwood, Kettering, Miamisburg, Northmont, Vandalia-Butler, Huber Heights, Piqua and Centerville, said they did not plan to arm their teachers.

Sidney and Mad River both previously had response teams in their districts but disbanded them last school year. Officials at those schools said they simply plan to reinstate those teams.

Mad River superintendent Chad Wyen said the staff members who have access to guns will store them in digital safes in locations known only to the approved staff members. The response team is not their only line of defense – Wyen said a close relationship with the Montgomery County Sheriff’s Department, Riverside Police Department and a new school resource officer are other aspects of school safety.

“We constantly assure parents that we have a multi-layered approach to school safety,” Wyen said. “Keeping our students and families safe within our buildings is our top priority.”

Both districts said they may have a delay in implementing their rapid response teams this school year, since the state has not yet hired all the workers for the Ohio School Safety and Crisis Division, who are needed to approve the training the districts have.

Humble and Wyen both said they believe their training matches the minimum standards put up by the state.

DeWine said the state wants to have 16 mobile field trainers hired in the Ohio School Safety and Crisis Division by early September.

The warning sign you see entering Stebbins High School. Mad River School district staff members volunteered to be an armed and trained response team and were approved by the district administrators as well as law enforcement. MARSHALL GORBYSTAFF 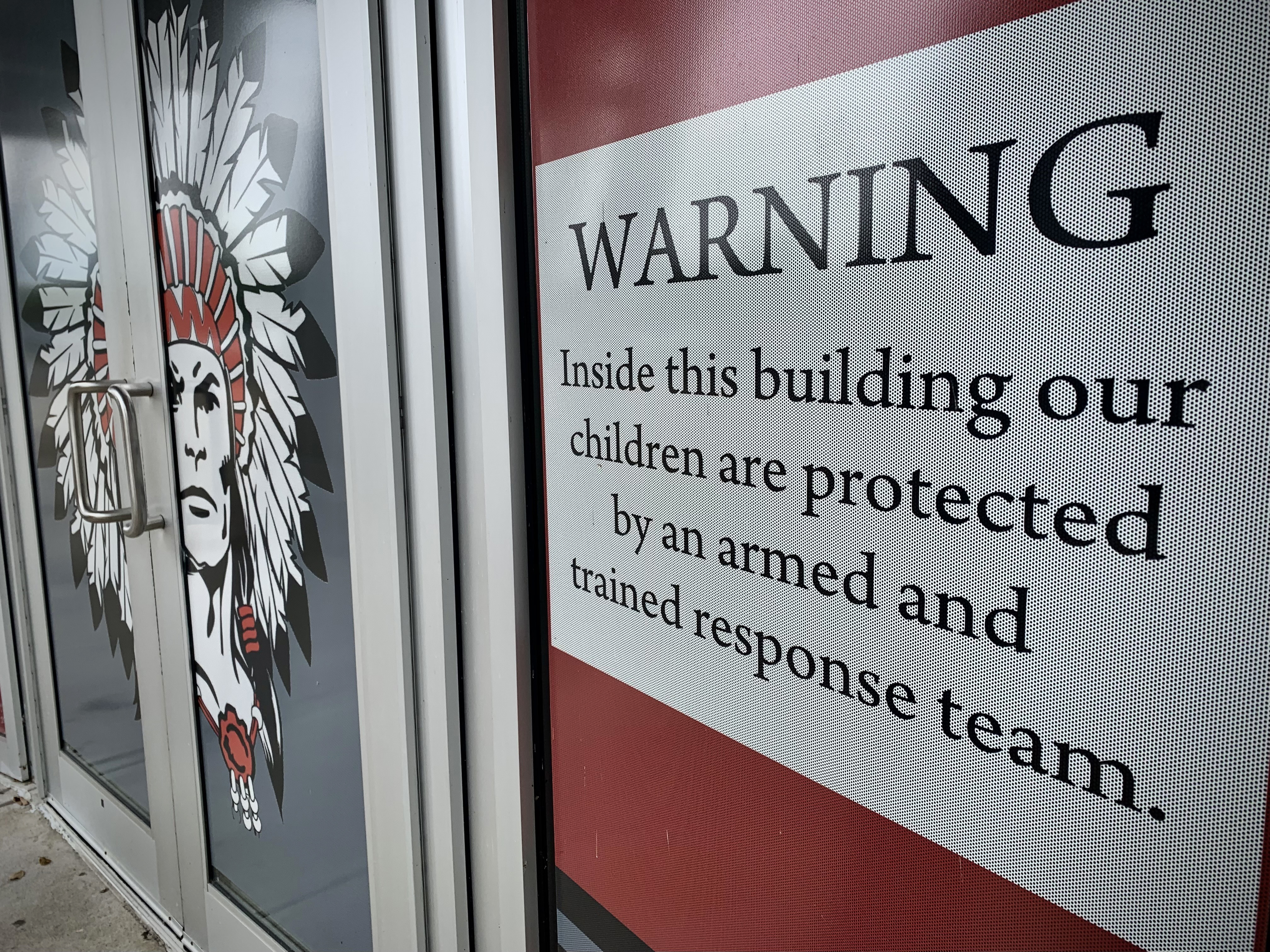 The warning sign you see entering Stebbins High School. Mad River School district staff members volunteered to be an armed and trained response team and were approved by the district administrators as well as law enforcement. MARSHALL GORBYSTAFF

Measures like locking doors, having visitor passes for people who aren’t students or staff, hotlines for people to report tips about shootings and trying to cut down on bullying and insecurity at school also help keep students safe.

The money will be used on physical security upgrades such as security cameras, public address systems, automatic door locks, visitor badging systems and exterior lighting, according to DeWine’s office.

Another round of funding is upcoming, said Jill Del Greco, a spokeswoman for DeWine’s office.

Vandalia-Butler superintendent Robert O’Leary cited the importance of mental health support for students at his district, in addition to security guards, locks, cameras and police relationships.

Therapists are available, he said, but the district also has a HOPE squad, which is a peer mentor program monitored by staff, in the high school. The district also plans to begin a mentoring program with people in the community and students this upcoming school year, O’Leary said.

Multiple districts said they do not plan to ask teachers to carry guns, because they have trained staff, often current police officers, as student resource officers, often abbreviated as SROs.

“We are incredibly happy with our partnership with the Troy Police Department, as they do an excellent job looking after our staff and students and doing all they can to ensure their safety,” Piper said. 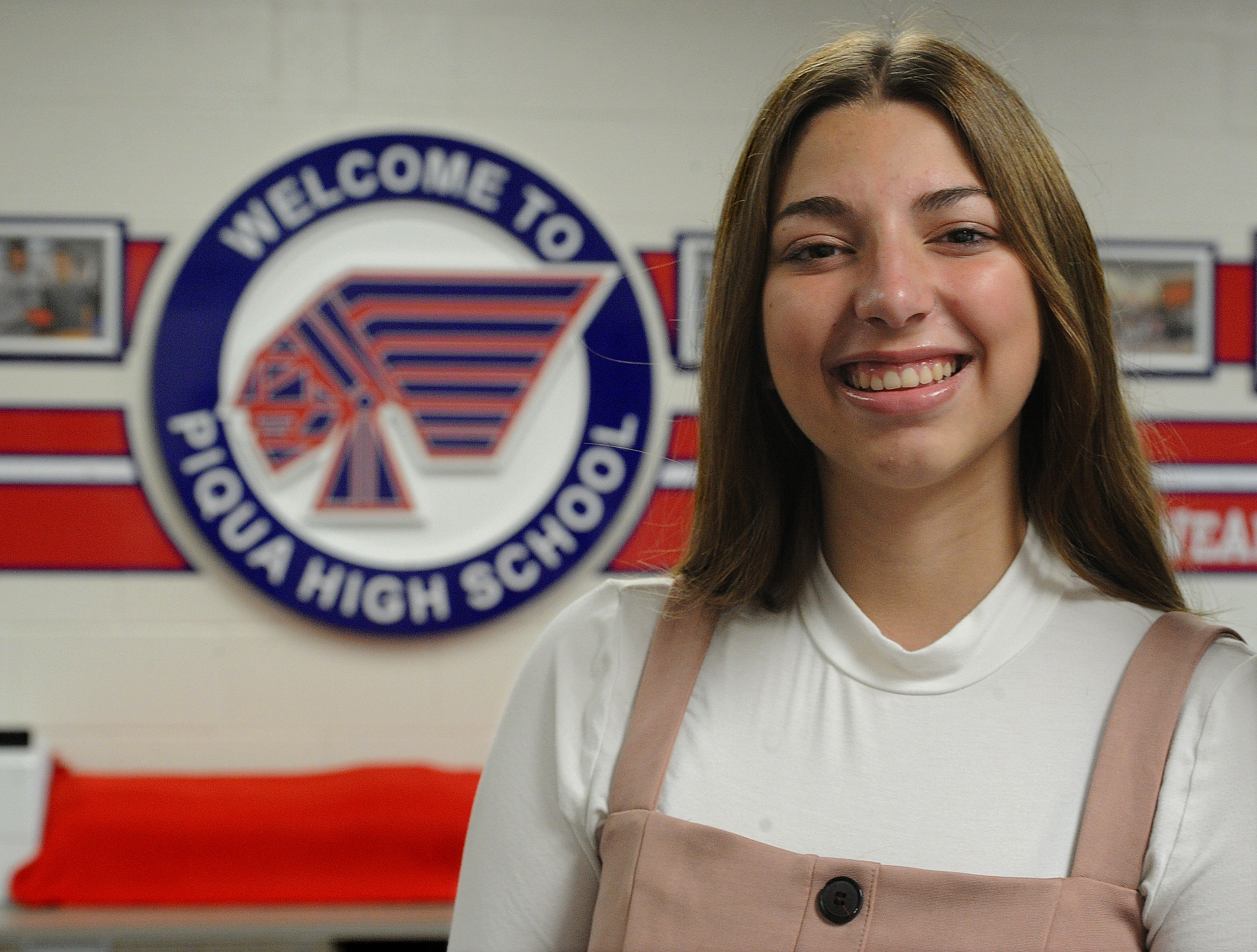 Marin Funderburg is one of 16 students from across the state chosen to be on the Ohio Student Safety Advisory Council, which advises the state on school safety.

“Honestly, I just I’m so tired of what has been happening recently,” said Funderburg, a junior at Piqua High School, when asked why she wanted to be on the council. “And I think it’s time we take action more in Ohio, in a good direction.”

Funderburg said she goes through school every day thinking about the possibility of someone bringing a gun to school.

“I think it definitely affects the way we learn,” Funderburg said. “I mean, it’s such a fear that it kind of gets in the way. You never know what could happen to you when you go into school.”

For Jordan Lewis, a junior at Butler High School who is also on DeWine’s student advisory board, school shootings aren’t something he thinks about as frequently. But he said he believes the state and his school could be doing more to keep students safe. 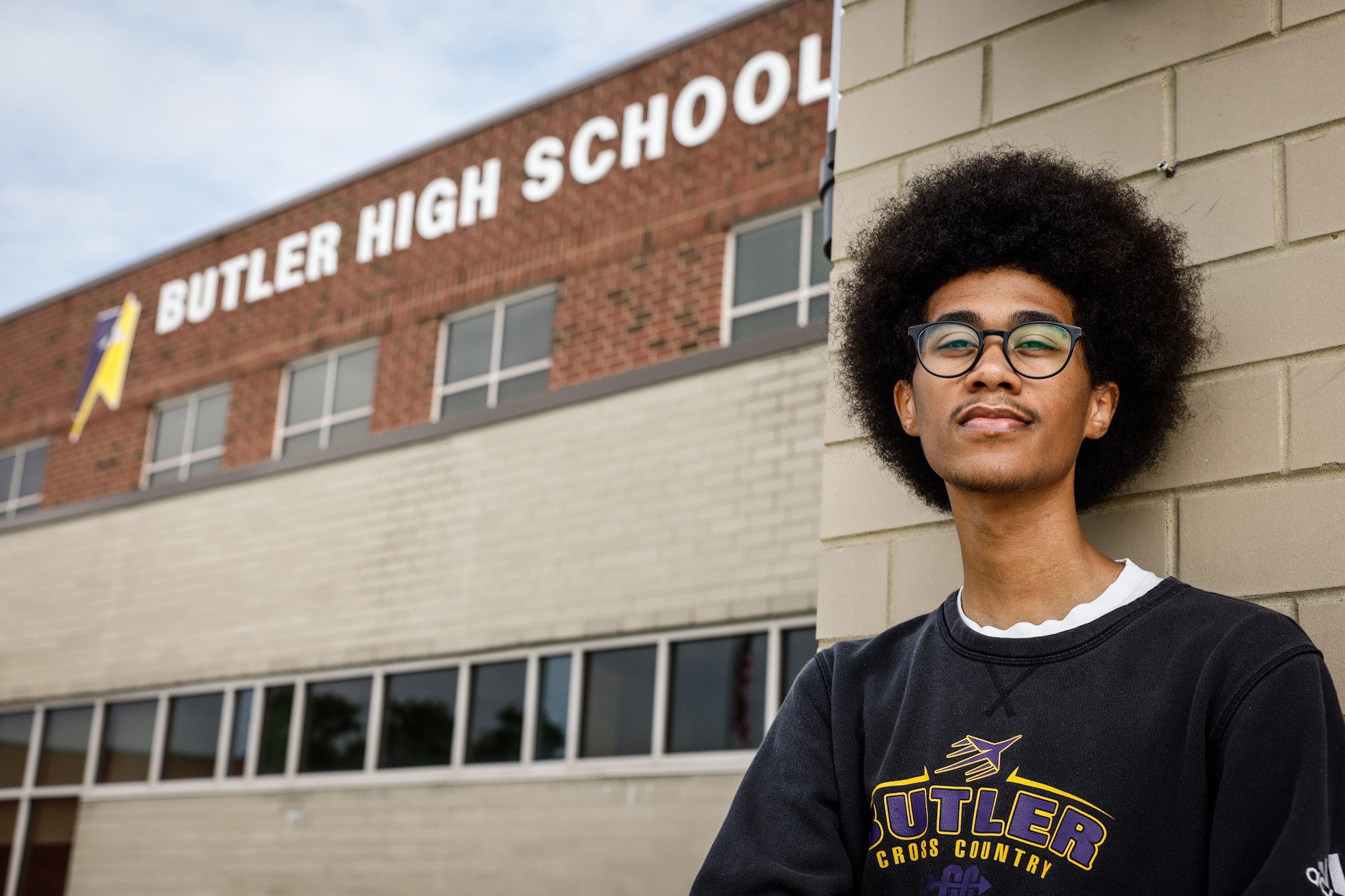 “I think that guns can be used for self-defense. However, you do not need a military grade gun to do that,” he said.

Lewis said he’d also like to know more about his own districts’ plans to keep kids safe, including knowing more about security guards and standardizing how teachers talk about school shooting drills.

Lewis noted that not every school has access to a security system, and not all schools keep their doors locked. He said he looks forward to hearing other students’ perspectives in other districts.

“When me and my classmates are in class, I personally don’t think that everyone is thinking about mass shootings,” Lewis said. “However, I don’t know how that is for different schools, which is why being on a council , I could maybe go to those schools and ask more questions.” 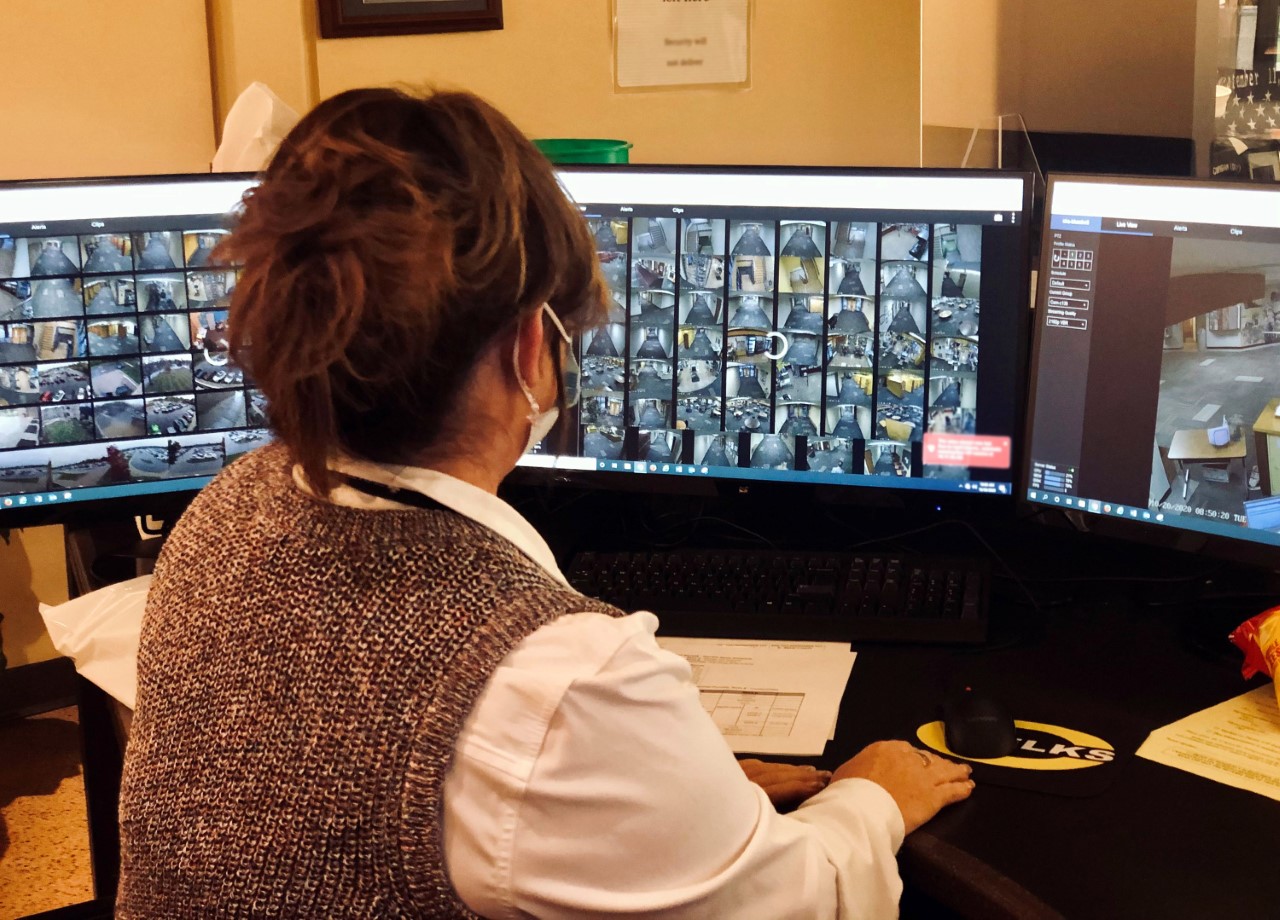 What can parents do?

Dr. Mary Beth DeWitt, chief of child psychology at Dayton Children’s Hospital, said one of the best things parents can do to be involved with their child’s safety is going to school parent teacher nights and asking questions.

“Ask, how do you ensure my child’s safety and how do you what resources do you have available to my child if concerns are present?” DeWitt said.

For parents who are able, volunteering in a classroom and asking teachers questions are great ways to engage with the teachers and connect with your kid, she said.

It is also helpful to have “safety people” for kids, DeWitt said. For many kids, their primary caregivers are their safe people at home. At school, that’s often a teacher.

DeWitt said she appreciates that many more schools now have counselors.

“There’s so many kids that don’t come through our doors that are probably struggling just the same,” DeWitt said. “And so being able to be accessible to kids where they are, in their primary care offices, in their schools, youth groups, whatever, is really a big step towards improving the mental health of kids.

ExploreDPS international school on track to open in August