Title IX is always on Candice Storey Lee’s mind and the Vanderbilt athletics director believes that’s how it should be for any administrator running college programs.

“I would hope that’s part of our DNA and that it is seen in how we make decisions on a day-to-day basis,” Lee said.

By most accounts, it is.

It certainly was during the height of the COVID-19 pandemic. At times, Title IX was at the forefront of decisions by ADs. When schools examined which programs might be cut to save money as the spread of the virus shut down the sports world in 2020, the law prohibiting sex-based discrimination was a major factor.

It was an example of how Title IX ensures equity between men and women in education and prohibits discrimination on the basis of sex in any education program or activity receiving federal funds, such as student financial aid.

“The law is meant to shape decision-making and behavior, and it has done that,” Virginia athletics director Carla Williams said. “I think it will continue to do that.”

Compliance can be measured in multiple ways, including whether the overall program’s gender breakdown is proportionate to that of the general student body. The goal is ensuring men and women have equitable participation opportunities as well as access to scholarships.

But the shutdown created financial pressures, particularly for Division I programs with lost revenue from the canceled NCAA men’s basketball tournament and uncertainty about whether football – which largely funds Olympic and lower-profile sports programs – would go forward at all.

Schools that chose cuts had to consider Title IX compliance numbers for remaining programs. And ultimately, cuts hit more men’s programs (47) than women’s (22) in Division I, according to data from The Associated Press and wrestling site Mat Talk Almanac.

The Pirates, an American Athletic Conference member, announced cuts to four programs –men’s and women’s swimming and diving, men’s and women’s tennis – in May 2020 while citing a $ 4.9 million budget deficit. The school later announced plans in January 2021 to restart the women’s programs while paying more than $ 189,000 in a settlement to avoid a gender-equity lawsuit.

“Certainly Title IX is extremely important for all that it represents, and it certainly is a factor when you go down that path,” Gilbert said.

“As I’ve mentioned before, that was an excruciating decision that still bothers me a great deal from the human side of it. It is not something that I ever want to go through or want our student-athletes or department to go through ever again. But the financial difficulties are a reality and they continue to be a reality today. “

Making the numbers work can be tougher at schools with higher female-to-male ratios in the student body.

At Portland in the West Coast Conference, where women represent about 60% of students, athletics director Scott Leykam said sports such as rowing often recruit walk-ons from campus. That was difficult when the campus shut down amid the pandemic, though the Pilots avoided cutting any of their 16 athletic programs.

“The other thing that we had to make some decisions on … when everybody got that extra COVID redshirt year, (was) making sure that we were balancing that male-female” ratio, Leykam said.

Financial challenges will always be an aspect of college sports, but more schools are finding ways to fund and expand women’s programs.

North Carolina’s efforts include the ongoing FORevHER Tar Heels campaign launched in 2019 to support 15 women’s programs with facility upgrades, scholarship needs and mentorship programs. The campaign continues at the Atlantic Coast Conference school, which fielded women’s varsity teams in 1971 before Title IX’s implementation, even after exceeding a $ 100 million target.

“I will say that (the campaign) of $ 100 million just for women’s athletics is something we’ve never focused on,” said UNC athletics director Bubba Cunningham, who oversees a 28-sport program with 41 of 57 team national championships coming in women’s sports. “And that is a big focus of this campaign.”

At Vanderbilt, Lee’s department recently announced the Southeastern Conference school would add women’s volleyball for the 2025-26 season, a resurrection for a program discontinued after 1979-80.

And at South Florida, the AAC program has announced additions of women’s lacrosse for 2023-24 and women’s beach volleyball for 2024-25. That would push the Bulls to 12 women’s sports and 21 overall.

“I bet you 25 or 30 years ago, if I would’ve had a donor that only wanted to support let’s just say baseball, the softball one would’ve fallen and lagged behind,” Kelly said, adding: “But because our staff’s become educated, to become more mindful of this as a whole, it became a joint project.

“At the end of the day, it worked out great because (donors) understood that and hopefully that will be an example for other projects we do going forward.”

For Lee, in her second year as the first female AD in the SEC, it’s an example of what she hopes will be the norm for athletics administrators.

“I would hope that in the next 50 years, this commitment to gender equity is really baked into who we are, what we do every day,” Lee said.

“You hope that it continues to create more opportunities at every level, and not just for athletes but also for coaches, for administrators, for leadership, for CEOs,” she said. “I would just like to see it where we almost take it for granted because it becomes a clear part of who we are.”

FILE – The field of runners compete in the women’s NCAA Division I Cross-Country Championships, Saturday, Nov. 23, 2019, in Terre Haute, Ind. The pandemic shutdown created financial pressures, particularly for Division I programs with lost revenue from the cancellation of the NCAA men’s basketball tournament and uncertainty about whether football –- which largely funds schools’ abilities to offer Olympic and lower-profile sports programs –- would go forward at all. (AP Photo / Doug McSchooler, File) 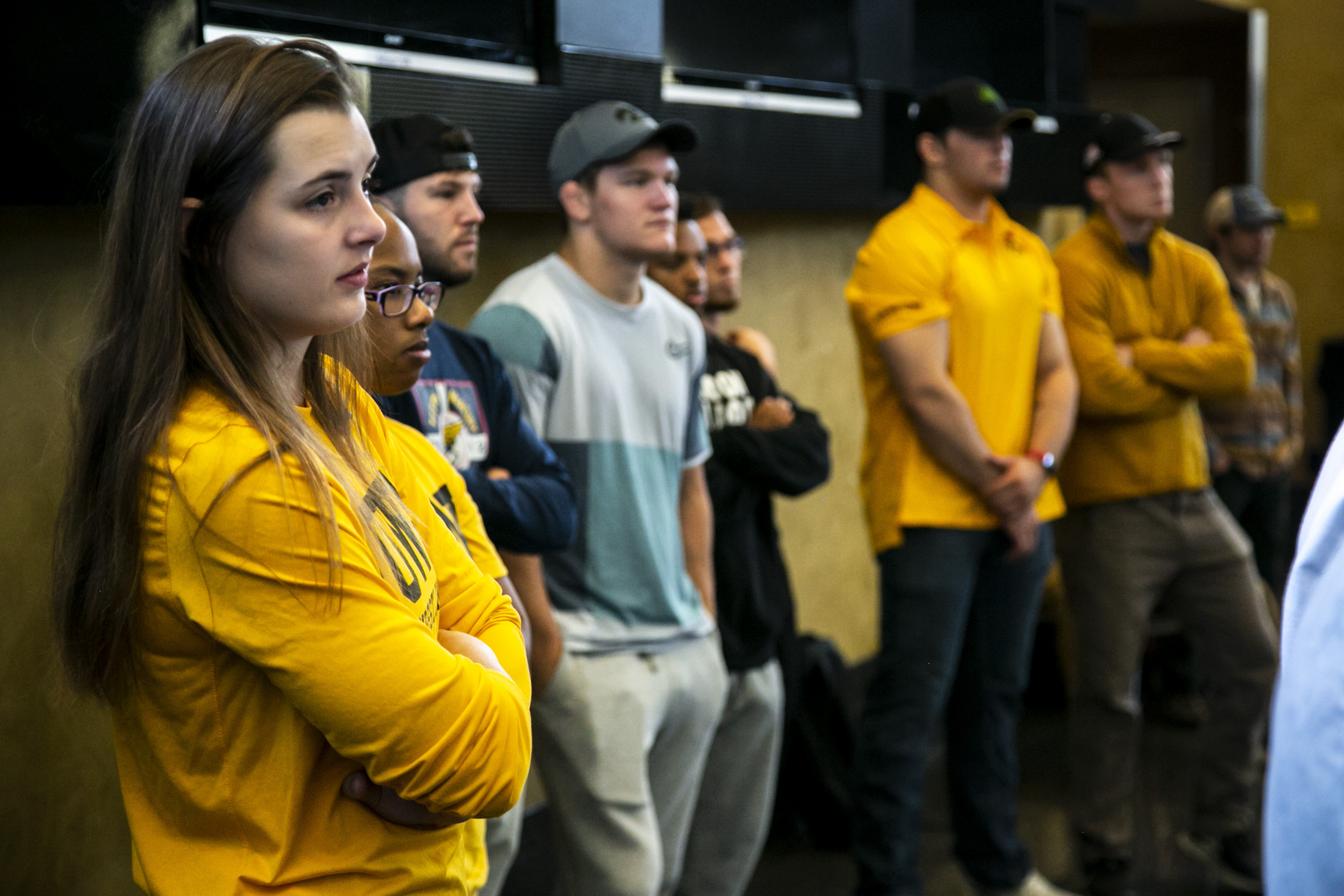 FILE – Rachel Watters listens during a news conference announcing an NCAA college women’s wrestling program for the Iowa Hawkeyes, Thursday, Sept. 23, 2021, at Carver-Hawkeye Arena in Iowa City, Iowa. Financial challenges will always be an aspect of college sports, but there increasingly more opportunities for growth when it comes to enhancing gender-equity opportunities. (Joseph Cress / Iowa City Press-Citizen via AP, File) 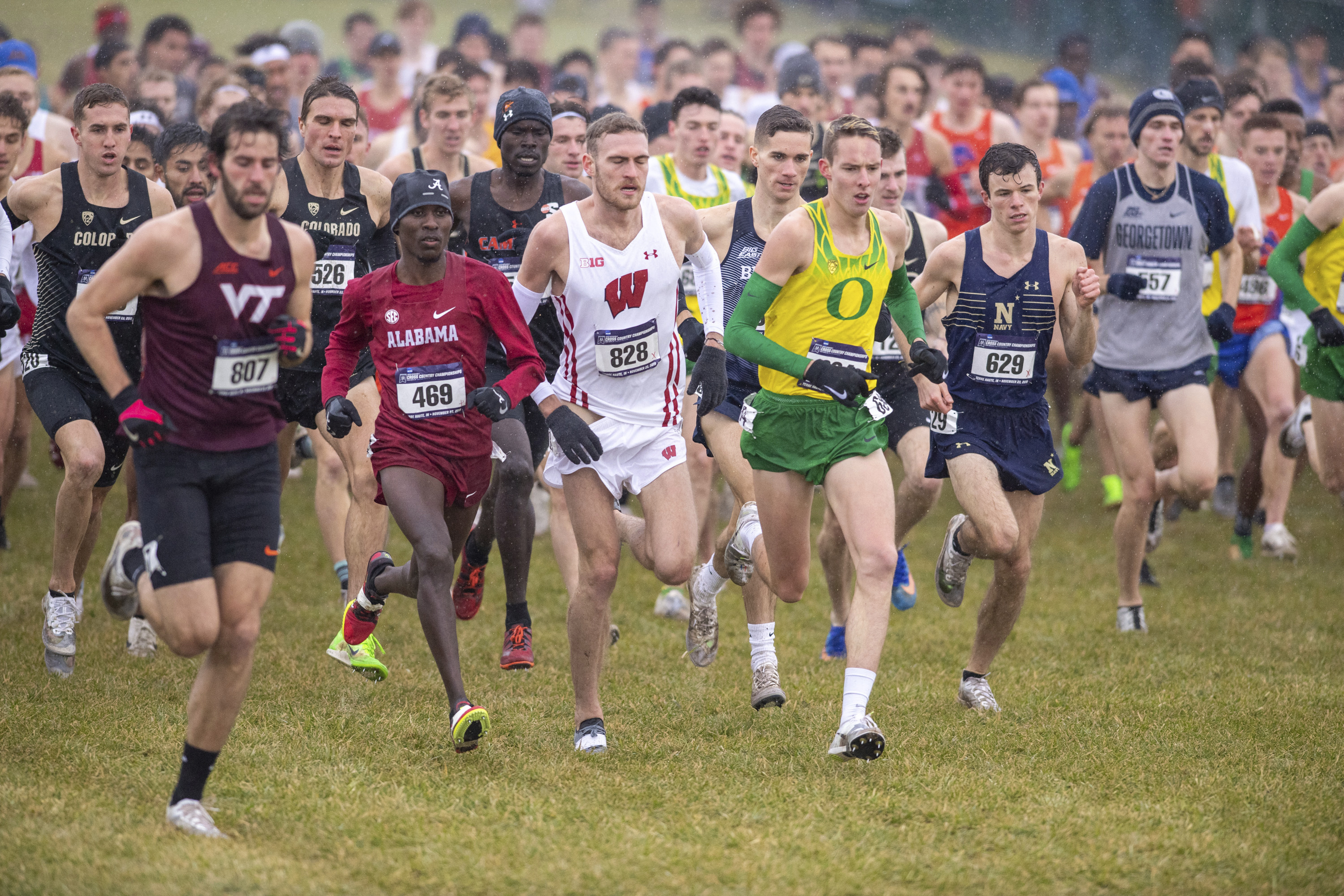 FILE – In this Nov. 23, 2019, file photo, runners compete in the men’s NCAA Division I Cross-Country Championships in Terre Haute, Ind. The pandemic shutdown created financial pressures, particularly for Division I programs with lost revenue from the cancellation of the NCAA men’s basketball tournament and uncertainty about whether football –- which largely funds schools’ abilities to offer Olympic and lower-profile sports programs –- would go forward at all. (AP Photo / Doug McSchooler, File) 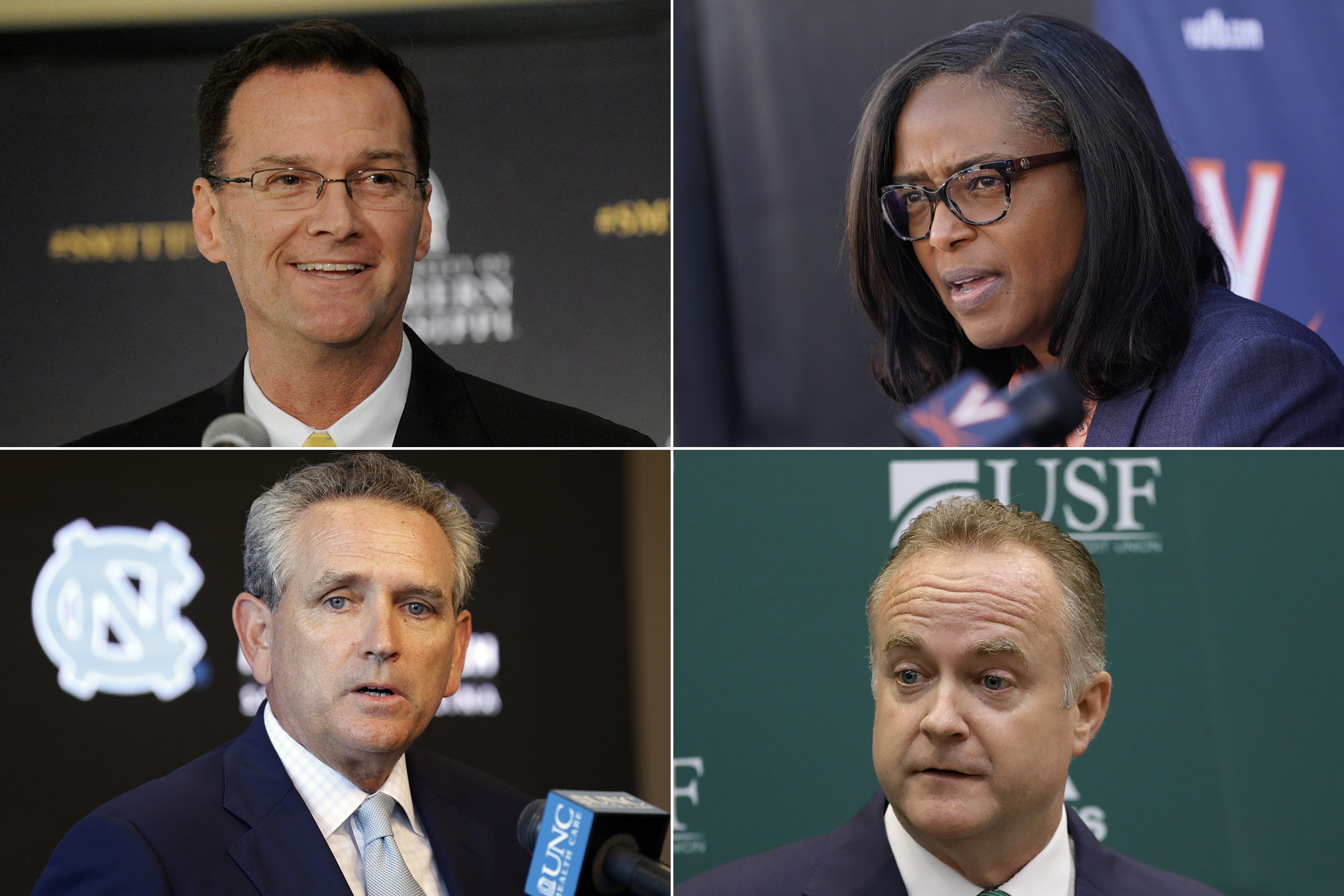 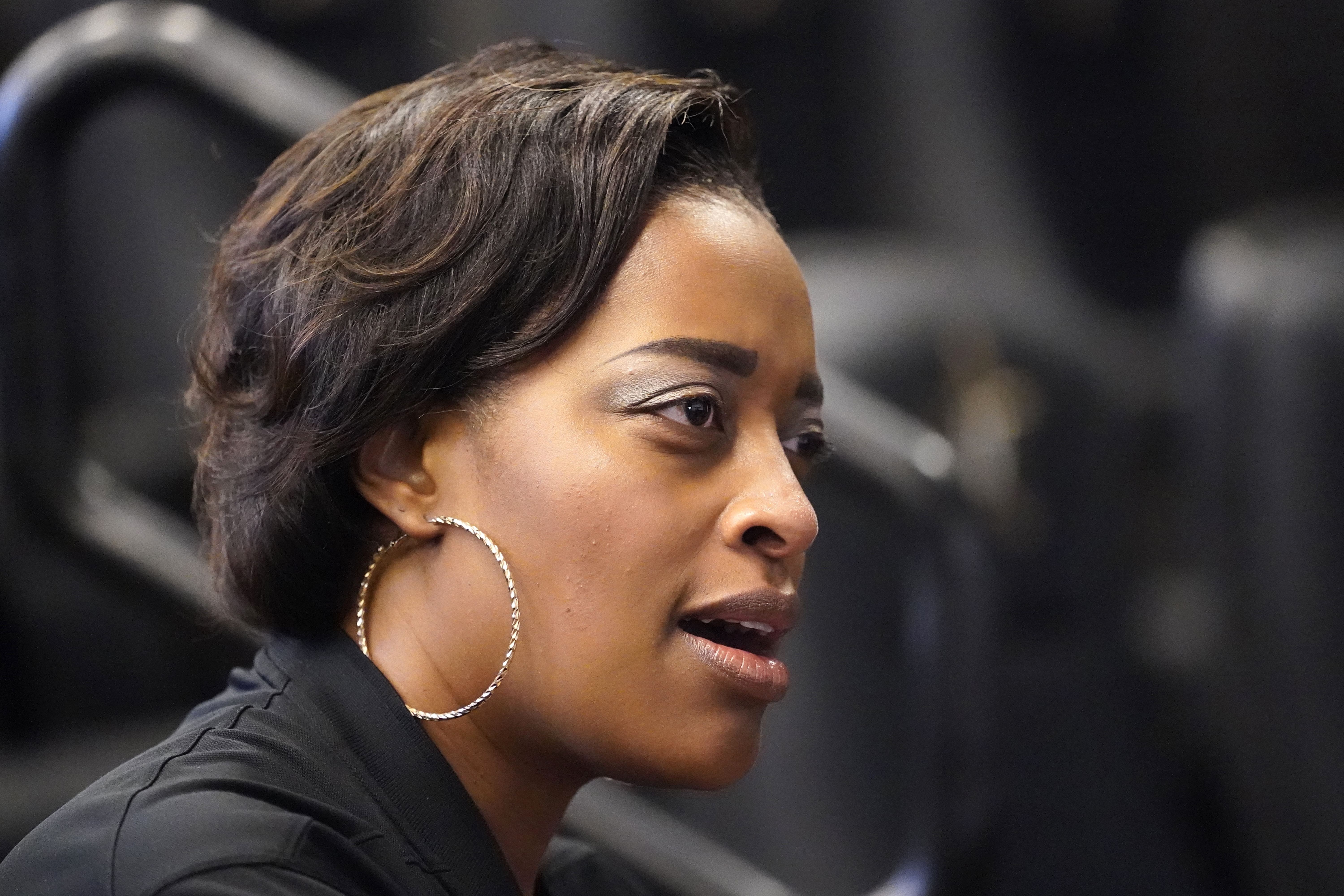