As I’ve shared before, my son loves to read. In fact, his favorite period at school is library, followed by math. So when I learned that there was a series of books that combined his two favorite subjects, I knew we had to have them.

I bought the first book, Bedtime Math: A Fun Excuse to Stay Up Late, and began reading it with my son as part of his bedtime routine. Each page has a short story on a silly subject, along with three math questions that are broken down into age groups: Wee Ones, Little Kids, and Big Kids.

For example, one story, “Hosed Down,” is all about fire hoses. The “Little Kids” math question is, “If you can spray your brother with a garden hose from 5 feet away, and a fire hose shoots 10 times as far, from how far away could you spray him with the fire hose?”

My son loved the stories and questions, and I enjoyed watching him transition from the Wee One’s category up to the Big Kids category over time.

As soon as we got through the first book, we bought the next two in the series, Bedtime Math: This Time It’s Personal and Bedtime Math: The Truth Comes Out, which both followed the same concept: If you pair silly math problems with fun illustrations and treat the books like any other bedtime story, kids will come to view math as something enjoyable rather than tedious. 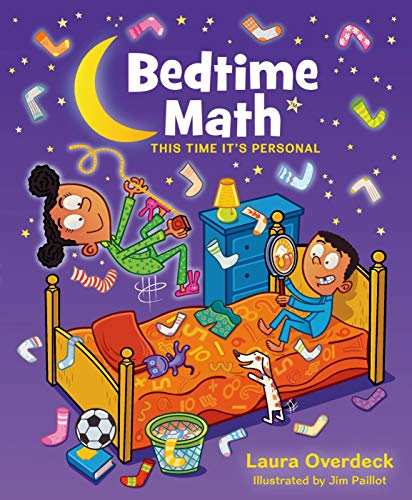 The most recent book in the series is slightly different from all the others, in that it uses questions that were submitted by kids (“How many twigs are in a bird’s nest?”) And takes readers through the steps required to solve each problem. Titled How Many Guinea Pigs Can Fit on a Plane ?: Answers to Your Most Clever Math Problems, the book teaches kids critical thinking skills so that they can figure out math-related problems on their own. 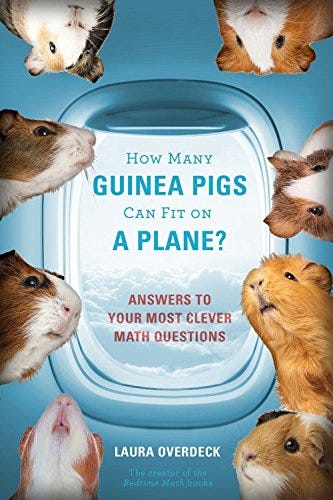 How Many Guinea Pigs Can Fit on a Plane ?: Answers to Your Most Clever Math Questions (Bedtime Math)

The Bedtime Math books were written by Laura Overdeck, who holds a BA in astrophysics from Princeton University and an MBA from the Wharton School of Business. According to her bio, she used to give her kids math problems each night along with bedtime stories, which eventually led her to write the Bedtime Math books.

Now, she is the Founder and President of the Bedtime Math Foundation, which aims to “help kids love numbers so they can handle math in real life.” In addition to their books, the Foundation offers free phone apps, a daily math email, math games, and a new math problem each day on the Bedtime Math website.

The Only Downside to Bedtime Math Books

Though my son is in the upper age range for the books, he refuses to part with them because he still enjoys reading them. I wish there were Bedtime Math books for slightly older kids because I think he’d love to take on harder problems, but written in the same absurd, kid-friendly manner.

Maybe one day Overdeck and her team will publish a book for tweens. In the meantime, we have the original Bedtime Math books to add some mental exercises to his nightly routine.