TRUSSVILLE – The Trussville Public Library hosted Rick Bragg on Tuesday, May 3, from 6:30 pm to 9 pm to discuss his new book, The Speckled Beauty.

Whether you know him for his books All Over But the Shoutin ‘ and The Prince of Frogtown or his latest heartwarming latest tale, The Speckled Beautythe event was open to all.

Many of Bragg’s stories stem from the people in the foothills of the Appalachians, mine people.

“These people were steelworkers and cotton mill workers, coal miners, “Bragg said.” My mom worked as a maid, kept other people’s children, and picked cotton. If you scratch most of us who grew up in this part of the world, then you’re going to find these people, and I think that’s why the books seem to resonate with people.

Bragg sat before a room filled with people who related to his stories in one way or another. He said he did not want to talk at the people who came to the event, he wanted to talk with them.

“We’re gonna talk to the folks about several books and the latest book, which is called the Speckled Beauty, which is a story about a really, really bad dog, “Bragg said.” I’d rather talk to them than talk at them. So, they’ll ask some questions, and I’ll try to answer them and hopefully, tell the truth. ”

He effortlessly kept the room laughing with his neverending stories that touched each person in the room. Those in attendance were turning to their neighbor, nodding in agreement or saying “me too” throughout the entire event.

Each person found a piece of themselves within the stories that Bragg told. 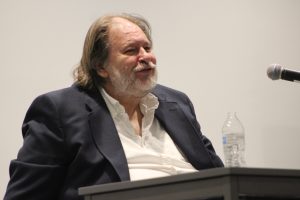 Bragg shared stories about the origin of his books and explained how each one came to be. (Photo by Hannah Curran)

Bragg said he hopes each person, whether they have read the books or not, leaves the event seeing the value of the stories, not just the stories but the people who are depicted in them.

“We’re really pleased with the turnout, “Baker said.” We sold out. We had a few people walk in, and we were lucky enough to have some seats in the back to accommodate them, they were not able to get the book ticket deal because they were sold out, but they’re able to buy one a signed book from Alabama Booksmith, so it’s a good opportunity. ”

Susan Matlock, special project coordinator for the Trussville Public Library, said in a previous interview that the library is honored to have Bragg come to Trussville.

This was a ticketed event, and ticket prices were $ 15 without a book and $ 35 with an autographed copy of his new book.