Choughs will be chuffed to soar in our skies again: Nature groups in Kent aim to introduce 50 of the historic bird of literature and legend

By Colin Fernandez For The Daily Mail

A vanished bird that features in a host of English legends is to make a dramatic return this summer.

The chough, the only member of the crow family with bright red feet, legs and beaks, has been extinct from most of England for centuries – remaining only in myths and heraldry.

Now the bird is the latest species in the UK to be ‘rewilded’. It is hoped it will soar again above the White Cliffs of Dover, just as it did in the early 15th century and later, when Shakespeare wrote of ‘The crows and choughs that wing the midway air’ in King Lear.

The chough, the only member of the crow family with bright red feet, legs and beaks, has been extinct from most of England for centuries

A group of nature charities are reintroducing the birds this summer to the Garden of England.

Laura Gardner, Director of Conservation at the Wildwood Trust, one of the charities bringing back the birds said ‘We’ve got our licenses in place we are building a release rookery, the first release is due to take place in July or August.

‘We’ll release small groups of 8-10 individuals each year for a number of years.

‘We want to establish a thriving population of 50 birds.’

In Kent, the bird features on the Canterbury Coat of Arms.

According to legend, the chough got its distinctive coloring after paddling in the blood of murdered Archbishop Thomas Becket, murdered in the city’s cathedral.

But there are now 23 breeding pairs in Cornwall. In Cornwall, the legend is that the murdered King Arthur transformed into a chough when he died.

There are also choughs breeding in Wales and the Isle of Man and Scotland – but because they are isolated in a few pockets, there are concerns they are becoming inbred.

Choughs do not like to migrate – preferring to stay put in their local areas – rarely traveling more than a few miles, making it highly unlikely the birds would ever reach Kent.

Bringing back the chough is only possible because chalk grassland has been restored across the county. 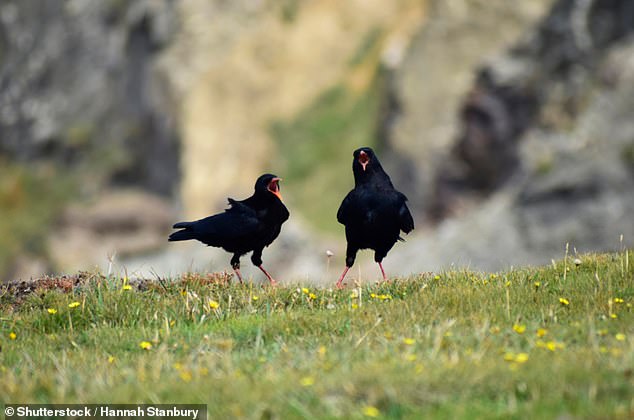 Bringing back the chough is only possible because chalk grassland has been restored across the county.

Dr Gardner said: ‘Choughs do not travel over long distances, and as the remaining populations are quite isolated the concern is that they are becoming quite inbred.

‘The species has become extinct over most of its range for more than 200 years. The population retreated westwards from 1500 due to the intensification of agriculture, changes to agricultural practices and persecution.

‘Now a lot of these threats have been removed and there’s habitat restoration.

‘So it’s fantastic we can put the species back and tackle the biodiversity crisis.’ Choughs require coastal grassland so areas of clifftop grass have been cropped to allow the choughs to pick out insects.

‘In Kent the ideal habitat is chalk grassland. The White Cliffs of Dover would be absolutely perfect!

‘Eighty per cent of our chalk grasslands have been lost, bringing back the chough is driving the habitat restoration on the coast.’

Bringing back the chough to Kent ‘is the first step’ Gardner said, with scope to reintroduce the bird to other areas of the English south coast.

She said observing the young choughs that are being bred for release is a joy, adding ‘The birds are so charismatic and intelligent’.

The choughs that are being prepared for release will be kept at the Wildwood nature reserve.

‘It’s been missing from Kent for 200 years. Hopefully, come August we’ll see them flying over the White Cliffs of Dover! ‘

The restoration of choughs to Kent is a partnership between Kent Wildlife Trust, Wildwood Trust, White Cliffs Countryside Partnership.

Other species that have been reintroduced in England in recent years include beavers and sea eagles.