Frontiersman Daniel Boone is perhaps as well-known a name in Kentucky as there is, and many in the state and around the country claim kinship to the iconic figure, or at least with the descendants of the early pioneers around the Fort Boonesborough area. The location was an early Euro-American settlement founded by Boone and others in 1775 along the Kentucky River in what is known today as Madison County.

With that in mind, you might put June 25 on your calendar. That’s when the Gathering of Descendants event happens at the Fort Boonesborough State Park, with hours from 9:00 am to 5:00 pm Booths representing historical and genealogical societies, family group organizations, and history museums will be available to share information on the pioneer families. There will be authors with books about the subject at the event, along with regular pioneer skills demonstrations. Retired UK anthropologist and Boonesborough researcher Nancy O’Malley will also make a presentation.

Also on that day, the park’s Transylvania Store Gift Shop and the Kentucky River Museum will be open and concessions available. Admission is $ 8 for adults and $ 5 for children 6-12. There will be parking in the lot on Kentucky 388 with free shuttles to the fort.

“With Covid, it’s been a few years since we’ve had this,” said the park’s manager, Jack Winburn, “and we’ve had it five or six times before that. People have come from as far away as California.

And how are things going overall for the park after confronting Covid, a flood, and an ice storm in recent years?

“We’ve been fully operational since last summer, except for the original fort site and the picnic area still (being) closed,” said Jack, who rose to manager after starting in 1978 as a part-time worker at the park. “There is definitely a boom in tourism right now. Camper sales have exploded, so the campground (at the park) feeds a lot of people to the fort. It is the most popular state campground in Kentucky. ” Jack added that he was “not seeing any sign yet that gas prices are hurting anything.”

The park was often a field trip destination for the fourth-grade classes I taught for twenty-two years, and I’m glad that it is open to many more to learn about and enjoy our state’s heritage.

For more information about this place of historical treasure for the state of Kentucky, visit the website at parks.ky.gov or the Facebook page. 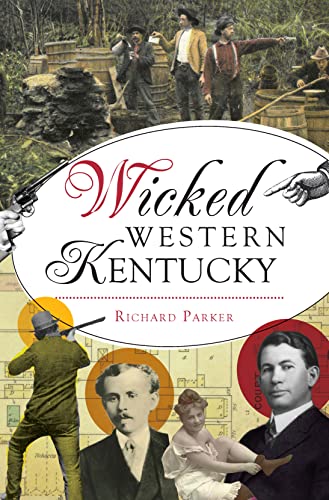 Over in the western part of the state, which is also rich in history, some of it is bad, according to author Richard Parker, who recently released his 128-page book, Wicked Western Kentucky. “Western Kentucky has always had a dark side, despite being the ‘Birthplace of Bluegrass Music,'” Parker noted.

The book looks at fifteen of the most nefarious people, places, and events, including bank robberies by the James’ Gang, feuding families, a bloodsucking vampire cult in Murray, and the notorious Night Riders of the Black Patch Tobacco Wars.

Ironically, the western Kentucky area is one of my favorite places to travel in the state. I’ve always found the people amazingly hospitable. They appear honored to be helpful to travelers. I once asked directions of a shopkeeper in downtown Henderson. The person took the time to walk me down the street to the destination. On other occasions throughout the region, I’ve often received similar kind gestures. Many of the heroes profiled in my books are from the western part of the state.

It’s always good to know the full story, however, and Parker’s well-researched book does just that.

Steve Flairty is a teacher, public speaker and an author of seven books: a biography of Kentucky Afield host Tim Farmer and six in the Kentucky’s Everyday Heroes series, including a kids’ version. Steve’s “Kentucky’s Everyday Heroes # 5,” was released in 2019. Steve is a senior correspondent for Kentucky Monthly, a weekly NKyTribune columnist and a former member of the Kentucky Humanities Council Speakers Bureau. Contact him at [email protected] or visit his Facebook page, “Kentucky in Common: Word Sketches in Tribute.” (Steve’s photo by Connie McDonald)