Mt. San Antonio College students attend the 2022 Transfer Advantage Program event hosted by nearby Cal Poly Pomona on March 22. The program is for Mt. SAC students interested in transferring to the university. 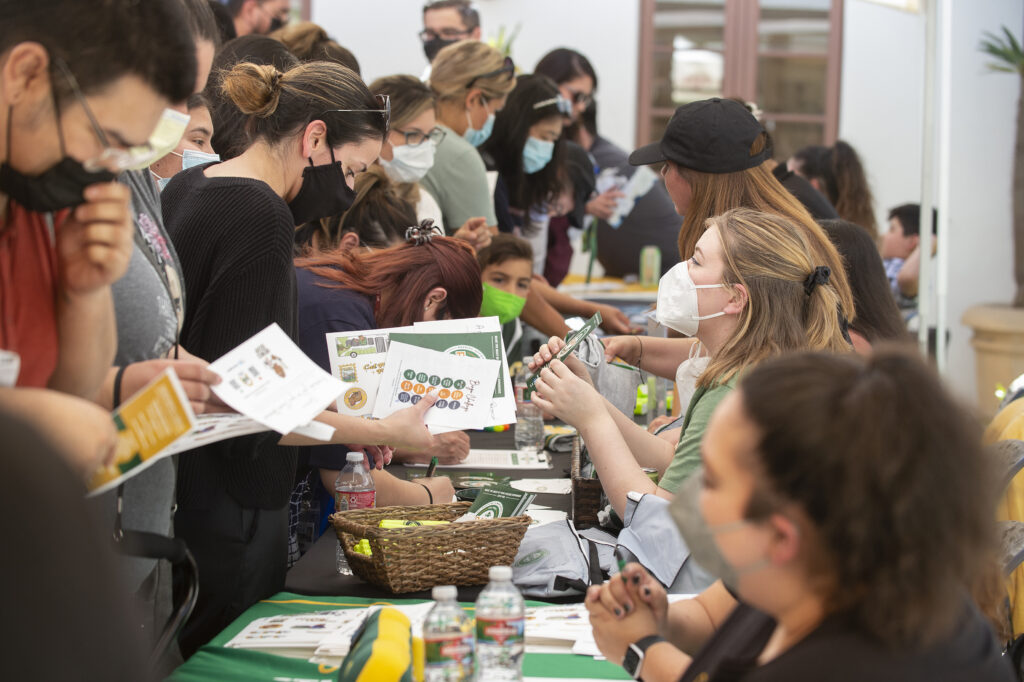 Mt. San Antonio College students attend the 2022 Transfer Advantage Program event hosted by nearby Cal Poly Pomona on March 22. The program is for Mt. SAC students interested in transferring to the university.

California State Polytechnic University, Pomona, is seeing a record number of students apply to be a part of its fall freshman class. In fact, the campus received the most of those applications anywhere in the 23-campus CSU System.

But this year, those record numbers hide a troubling trend among a different group of students: Fewer transfer students from the community colleges applied to the Pomona university and to all the CSU campuses across the state.

It’s a challenging situation for officials at Pomona and other CSU campuses. How can they maintain or ease enrollment when popular programs are over capacity while encouraging more transfers to enroll? The result is more uncertainty than usual about how many transfer students will actually show up in the fall.

Brandon Tuck, admissions director at Cal Poly Pomona said it’s difficult to predict how the declines in transfer applications will ultimately affect fall enrollment because “the landscape is shifting, and it’s becoming more competitive.” With a smaller pool of transfer applicants, more colleges are recruiting more heavily, he noted.

But he emphasized that the size of the freshman class will not be increased in case the transfer enrollments decline. “Even though we have a record number of applications, we’re not looking to really grow our enrollment,” Tuck said. We are not looking to expand beyond what our current enrollment already is. ”

Cal Poly Pomona received 49,624 first-year applications – a 21% increase from last year for this fall and the highest of any CSU campus. The increase is partially attributed to the system eliminating SAT or ACT requirements for admission, Tuck said.But transfer applications decreased by 11% from last year, mirroring a systemwide trend that saw 13.5% fewer applications from community college students across the CSU system.

Of the 23 CSU campuses, 22 saw increases in freshman applications, excluding Cal Maritime, the maritime academy in Vallejo, and all of them saw decreases in transfer.

San Diego State, for example, saw a record-setting number of freshman applications, with 76,928 students applying for campus this year – a 14% increase from last year. But transfer applications were down 9%.

Stefan Hyman, an associate vice president for enrollment management at San Diego State, attributes the transfer decline to enrollment losses at the community colleges in 2020 because of the pandemic, when many students grew disenchanted with online classes, reduced their course load or stopped out altogether .

“All four-year universities rely on community colleges to send applicants two years later, “he said.” If they’re down 14% to 16%, then we’ll see a comparable decline, “he said.

Although Pomona is not one of the seven CSU campuses that are over capacity overalls, its most popular programs are. That means the campus receives far more qualified applicants than seats available. The campus is at or over its enrollment capacity for both freshman and transfer students in such programs as biotechnology, animal science, computer science, communication, accounting, and engineering fields from aerospace to mechanical.

Cal Poly Pomona typically looks for a 50-50 split between incoming freshmen and transfer classes – about 3,100 freshmen and 3,000 transfers. But just because there are more freshman applicants and fewer transfers does not mean the campus will open the door to even more freshmen, Tuck said.

“They’re all at different points in their academic journey,” he said. “So we do not try to make up one group with another group.”

A few CSU campuses are still accepting applications for freshmen and transfers for fall 2022.

Several factors make it more difficult to predict how many transfers will enroll.

Competition for transfer students is high from other colleges, including those outside of California. Tuck said the historically Black colleges and universities recognize the community college’s associate degree for transfer and have increased recruitment of these students.

With transfer applicants down across the CSU, San Diego State applicants will see more admission offers from other campuses too, Hyman added. That may lower the rate of those who choose to attend that university.

Audrey Yamagata-Noji, the vice president of student services at Mt. San Antonio, said the decreases in applications aren’t due to a “lack of interest.”

The pandemic forced some classes to move online, while others were completely shut down. So many students were not able to complete the required courses needed to transfer, she said.

Another reason transfer numbers are down is limited contact between students and advisers.

“When you can not have immediate direct contact with your students to advise them and remind them of dates and when to apply, then they’re just doing it on their own and sometimes things fall apart,” Yamagata-Noji said.

Finally, Yamagata-Noji said applications could be down because most universities accept transfer students only for the fall term. If a student misses the application deadline, then they sit around waiting a year to continue their academic career, “so there’s a stop-out issue along the way,” she said.

But Yamagata-Noji credits the Pomona university for making changes to open the door for more transfer students.

Currently, transfer students – unlike first-year students – generally need to meet only GPA requirements for admission to the campus. However, if they’re applying for a capacity-impacted major, they are also required to take additional or supplemental classes.

Cal Poly Pomona is exploring a “multifactor admission” model for the 2023 admission cycle for transfers that would mirror the one currently used for freshmen. In addition to GPA at the community colleges, the factors could include work experience, leadership roles or special status like the military as part of the admissions criteria.

The campus is also considering dropping a requirement that transfers take a supplemental course to be admitted to a capacity-impacted major, except in engineering and computer science, Tuck said.

Despite the enrollment balancing act, Tuck said the university’s changes would allow transfer students to apply to an alternate major if their first choice is over capacity.

Tuck said the change would allow the university to keep qualified and diverse applicants instead of turning them away because their first choice program is full.

“That’s what’s exciting for us, because we’re one of the few campuses that allow students to apply to an alternate major,” he said. “There’s still an opportunity that they’ll be admitted.”