A female scientist went limp as she and other climate change activists blocked a Washington DC highway as furious motorists late for work yelled at the police to arrest them.

Roughly 10 Extinction Rebellion and Scientist Rebellion protesters blocked I-395 going into Washington DC on Friday morning, halting the morning commute for many disgruntled drivers. They are demanding President Joe Biden, 79, to declare a climate emergency.

In video obtained by the DailyMail.com from News 2 Share’s Editor-in-Chief Ford Fischer, some commuters could be seen getting out of their cars cars to yell at police to remove them from the roadway, while others joined in on a chorus of car horns.

One commuter wearing a red quarter-zip, screamed: ‘Could you arrest these guys so we can go to work? This is not free speech! ‘

Another in a black sweatshirt yelled: ‘We got to go to work, man! We got to feed our kids, come on! Get out of the way! ‘

Another popped out of his sunroof to tell the protesters to ‘go to Capitol Hill if you’re really concerned about this d ** n climate change. This ain’t s ** t. ‘

Some of the protesters, including scientist Rose Abramoff, were arrested after they were seen chaining themselves to the White House fence on Wednesday.

On Friday, Abramoff went limp when Metropolitan Police gently lifted her up off the ground to arrest her for a second time. After noticing she wasn’t going to stand, he placed her back down and handcuffed her there.

Scroll down for video 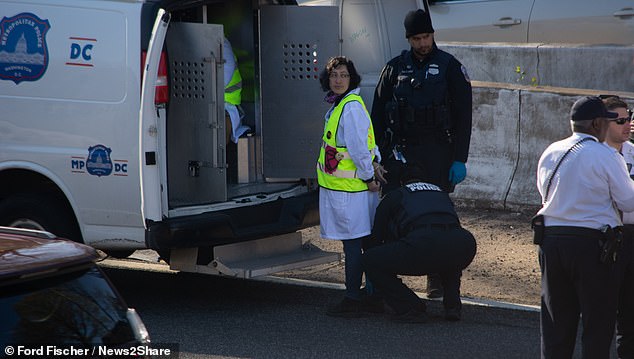 Police started arresting Abramoff and other protesters around 9am, shuffling them all into a police van to be carted off to jail 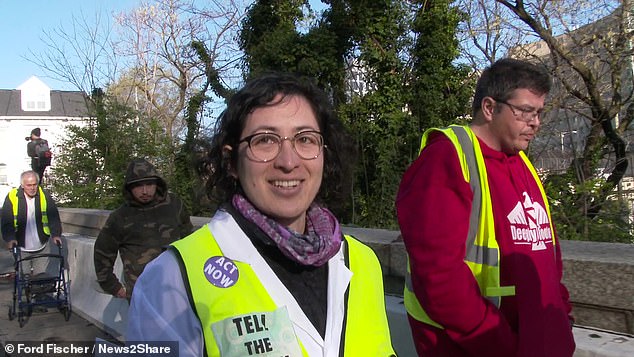 Abramoff (pictured before the protest) said she was doing this because ” I think scientists need to be out here with our children, with our Indigenous, with our old and our young, every race and generation ”

Her and several other scientists, who were not identified, were also arrested and shuffled into a police van, where they were taken to a local jail. Prior to the Friday protest, Abramoff told Fischer: ‘I think scientists need to be out here with our children, with our Indigenous, with our old and our young, every race and generation.

She mentioned she noticed ‘a couple cop cars’ as she walked towards the highway, acknowledging the protest ‘might be a short trip.’ It is unclear how long the protesters blocked traffic on Friday morning. 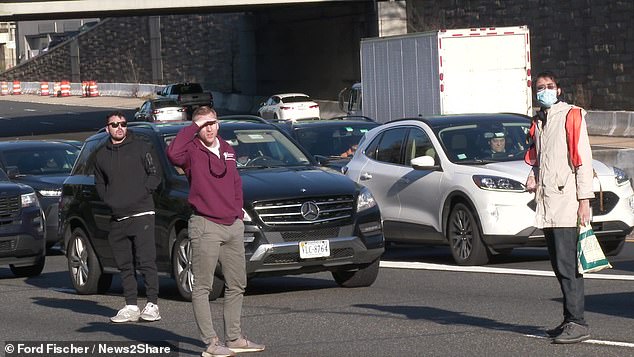 Two men (left) got out of their car to yell at the protesting, telling them ‘this isn’t free speech’ and that they’ve got ‘kids to feed’ 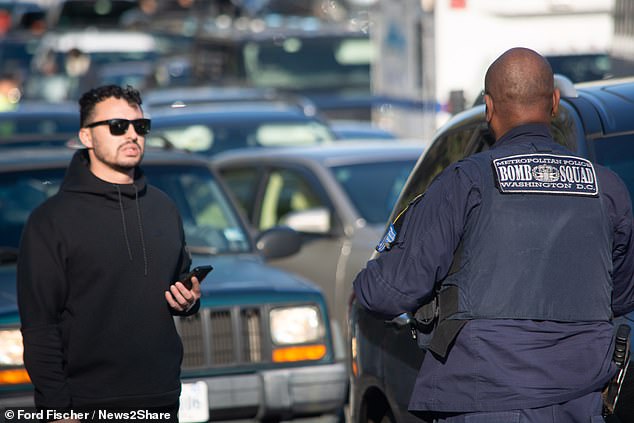 A man in a black sweatshirt said: ‘We got to go to work, man! We got to feed our kids, come on! Get out of the way! ‘ 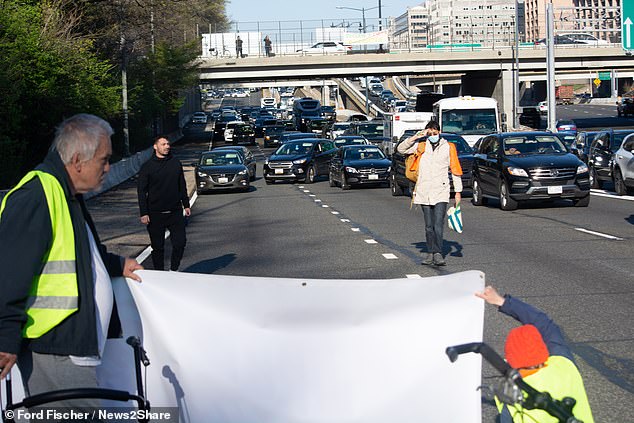 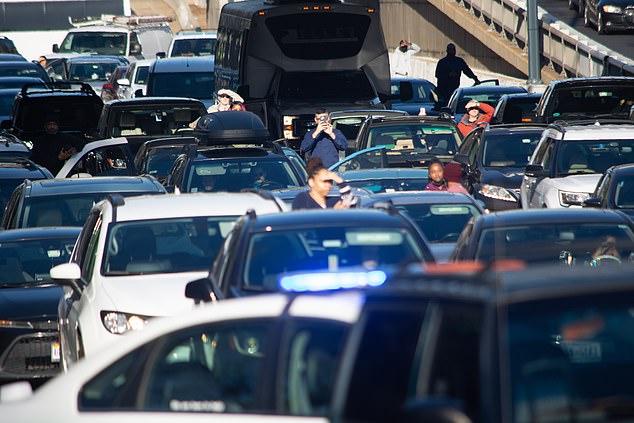 The protesters, dress in yellow safety vests, carried signs reading: ‘Declare a climate emergency,’ ‘the rebellion will be mycelial,’ and ‘scientist rebellion.’

Even more protesters were seen hanging out on the ramp holding additional signs and yelling back at commuters.

At one point, commuters can be seen turning around and driving westbound in the eastbound lane as police directed them. Traffic resumed normally shortly after, WTOP reported.

Earlier in the week, the group blocked the same highway and performed similar stunts in December and January near Third Street Tunnel and Dupont Circle.

On Wednesday, protesters from the same ground were provided from the White House grounds and Lafayette Park by Secret Service officers after

Agents cut the chains some of the activists used to secure themselves to the fences and hauled them off to jail.

One attached herself to the fence with a bike lock around her neck. The activist said she had chosen the bike lock out of opposition to cars. 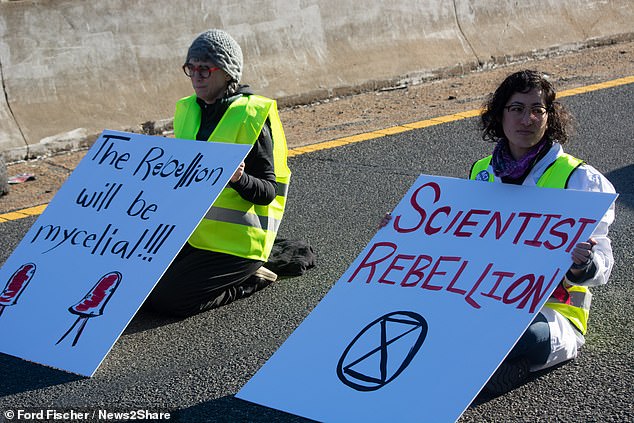 Protesters held signs reading: ‘The rebellion will be mycelial’ and ‘scientist rebellion,’ one of the two groups hosting the protests 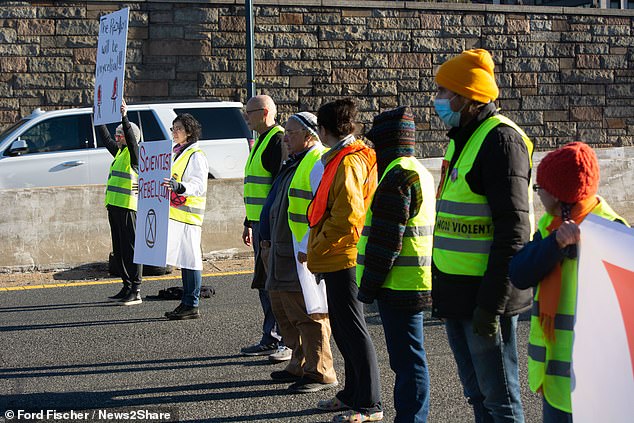 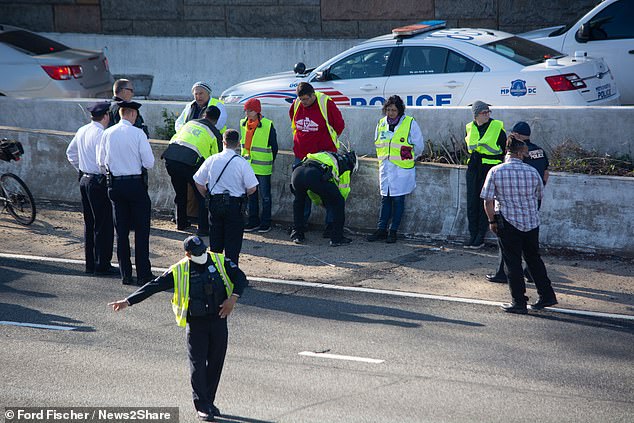 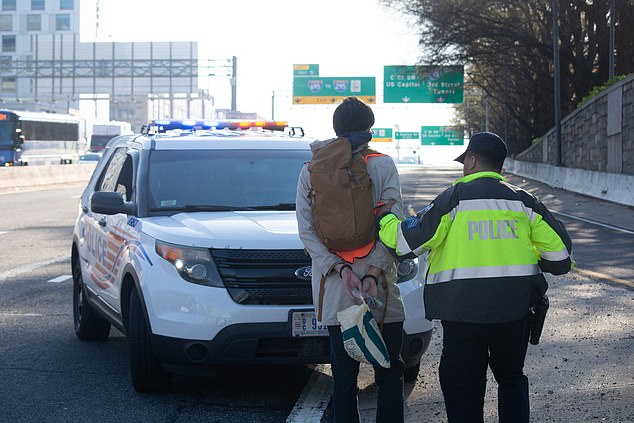 Two other protesters connected themselves inside a PVC tube on the other side of the White House fence.

‘We’re here to defend the Earth,’ one told News2Share. ‘Biden needs to step up his game and call a climate emergency.’

The other chimed in that there is value to ‘listening to Earth, rather than to people.’

Secret Service agents were seen pushing crowds back and heard yelling, ‘You’re resisting! This area is closed! ‘ as they threatened arrest.