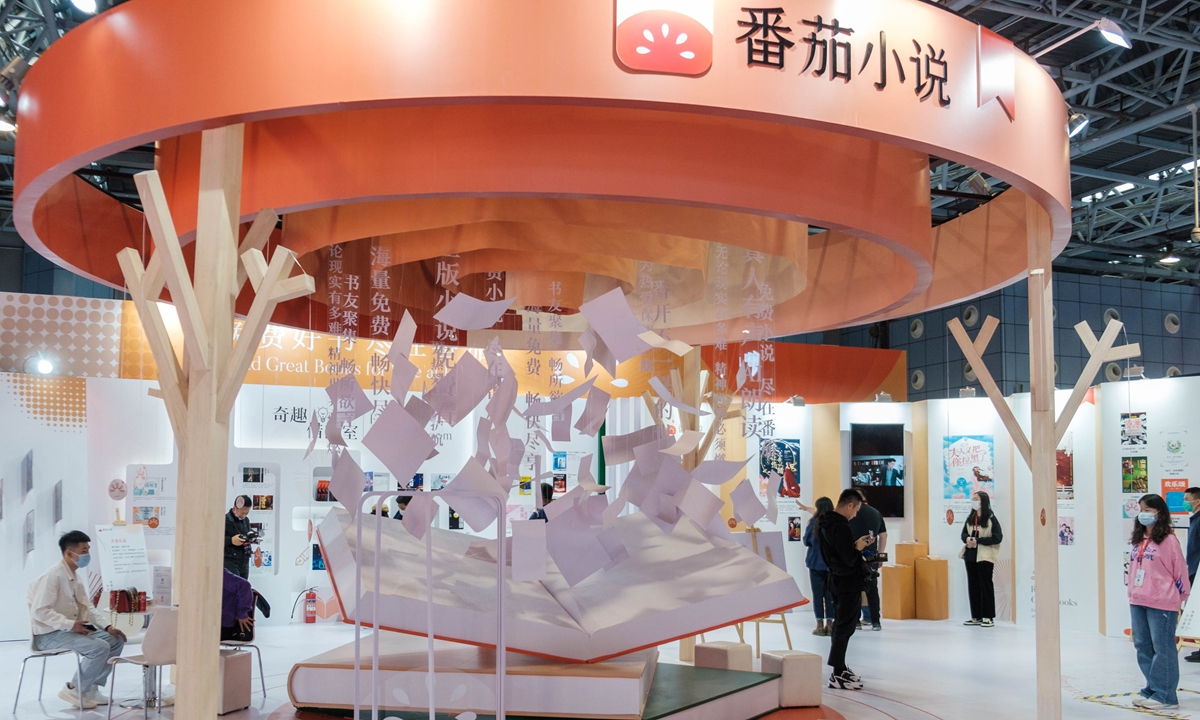 The global pandemic has prevented many people from enjoying life outdoors, but it has not diminished their passion for creativity or experiencing fresh stories through online literature.

According to a report that China Literature, a subsidiary of tech giant Tencent Holdings, sent to the Global Times on Thursday, both reading and writing web novels have become important means of entertainment for many people both in China and abroad, especially Generation Z born in the 1990s and 2000s. Additionally, many works by authors overseas have been influenced by translated Chinese online literature as some Chinese elements such as pandas, high-speed trains, and Huawei mobile phones can be seen in their works.

Statistics show that as of December 31, 2021, the international reading platform Webnovel had 2,100 translations of Chinese web novels, more than 200,000 overseas writers and nearly 370,000 original overseas works.

Qu Chang, a veteran translator who once translated into Chinese the hit book series A Song of Ice and Fire – upon which the record-breaking TV phenomenon Game of Thrones was based, told the Global Times that the development of Chinese online literature is leading the world as China now has a mature mechanism for publishing online literature.

“After years of trials, China’s online literature industry has been fully tested by the market. I believe the number of users will continue soaring in the future and influence more readers and creators overseas.”

According to a report by the China Internet Network Information Center, the number of users on online literature platforms in China reached 502 million in December 2021.

Qu explained that China has a large number of readers and users on these online reading platforms, which encourages creators to write high-quality, popular literature works. These large numbers also contribute to creating healthy competition. Meanwhile, many other countries do not have such a complete system.

“Many readers overseas are curious about the culture of China such as Taoism, martial arts and e-sports. So translated works feel fresh to them, which leads to more translations of Chinese online literature works,” he added.

Snoring_Panda, a 24-year-old online literature writer from Nepal, has been addicted to reading translated Chinese fantasy novels for seven years by now. Bored while being stuck home during the pandemic, he decided to try his hand at writing something himself.

“When I wrote my novels in the xianxia (Chinese fantasy) genre, my story was a tribute to all the Chinese web stories that I have read and loved,” he told the Global Times.

In 2021, the number of online literature writers overseas had more than tripled amid the global pandemic.

The report also shows that the percentage of online literature writers among authors in Southeast Asia is as high as 36.2 percent, ranking first, followed by North America with a little over 30 percent.

KazzenIX, a writer from the Philippines, told the Global Times that her work has a lot in common with Chinese net novels.

“Chinese novels really like the image of a strong, somewhat bad heroine, and my heroine is also like this.”

She revealed that writing has changed her life as she once struggled with depression, but now she has occupied herself with writing, and her life has become more challenging and brighter as well.

It is interesting to see that many creators are not professional writers but computer engineers, bank employees and teachers. Meanwhile, they might come from majors such as mathematics and physics instead of the humanities.

According to the report, the largest group of overseas online literature writers, 56 percent, are 22 and under, while the next largest group at 25 percent are 22-27 year olds.

Wang, a 22-year-old Chinese office worker who used to write novels from time to time on a Chinese online novel website to earn money as a student, told the Global Times that after the pandemic she noticed “a clear increase in the number of online novels being published. “

As the pandemic went from weeks to months, many touching stories about doctors, police officers and street cleaners staying at their posts amid the fight against COVID-19 inspired her and her editors.

A Nian, a screenwriter originally from Wuhan, Central China’s Hubei Province, who now works in Beijing, told the Global Times that after experiencing the unforgettable COVID-19 lockdown in her hometown, the themes of her creations began to shift from idol-focused dramas to social themes. Recently, she has been paying attention to people who donate their bodies to science.

“The influence of Chinese web novels has been increasing not only in countries neighboring China but also in Western countries,” Zhang Yiwu, a professor at Peking University, told the Global Times on Thursday.

He explained that the relatively early development of the Chinese web novel market helped give it a head start. Now that the number of translation platforms have increased and payment issues have been solved, more and more Chinese people are entering the industry and devoting themselves to creating brilliant works.

Both Qu and Zhang expressed optimism about the future development of Chinese online literature overseas, saying that it is as an ideal way to promote Chinese culture overseas as well as contribute to cultural exchanges between China, other Asian countries and the West.