You can find plenty of books about beer at the Denver Public Library and its 27 branches. Bucket lists, travelogues and atlases? Yep. Local brewery guides and pairing suggestions? Of course. Beer history? There are tomes dedicated to the past for Boulder, Fort Collins, Gilpin County and Denver. In fact, if you ask your friendly librarian, you could find books on beery subjects you did not even know existed.

But what if you’re already all drinking? Well, on Thursday, April 7, you’ll probably be able to find that friendly librarian at the appropriately book-themed Fiction Beer Company, which is hosting a National Library Week beer release, a literary-themed trivia night and several other fun libraries -related activities in honor of the DPL’s Friends Foundation, which raises money to help support the institution.

“[We’ve] have been a big supporter of the Denver Public Library throughout our years of operation, “says Fiction co-founder Christa Kilpatrick, adding that the brewery made a beer with DPL back in 2015 as well. So when the Friends Foundation asked again this year, the answer “was an enthusiastic ‘Yes.'” Former Foundation board member Cathy Schwartz is also a member of the brewery book club Kilpatrick runs.

The beer is named Blue Radley Blueberry Lemonade Radler in honor of the character Boo Radley from Harper Lee’s To Kill a Mockingbird. It is based on a German-style radler, which is a cross between a wheat beer and lemonade or other juice. This one was also made with blueberries and two kinds of hops.

The very cool green and blue label incorporates part of DPL’s logo into the leaves of a tree, which is one of the primary symbols in the book, along with a drawing of the library’s central branch (another pun?). It also features books like the ones in Fiction’s own logo, not to mention its bar.

The radler was suggested by one of the foundation’s board members – who tossed out a wide range of style ideas – meaning they must be reading all those library books on beer. Some of the other beers on the list included West Coast and East Coast IPAs, a pilsner, an India Pale Lager and a Shandy. 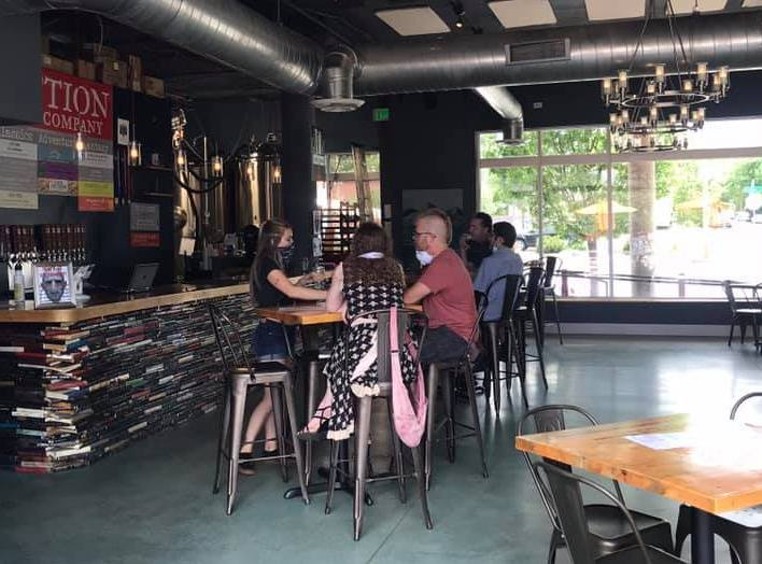 Fiction Beer Company’s bar is made out of old books.

Of course, literary-themed beers fit right in with Fiction Beer, which names all of its beers after characters or ideas from a wide range of books. The brewery has supported other literary activities in the past, including a its special Poetic Ales program, which was designed “to promote voices from underserved communities and diverse backgrounds” and “to honor the stories of those who have faced adversity and injustice.”

Thursday’s National Library Week day begins at 2 pm when Fiction taps the beer (which is also available in sixteen-ounce four-packs to go), and invites people to sign up for library cards and to write a letter of thanks to any librarian who has helped them at any time over the years.

There will also be some book-related crafting including the making of coasters and poetry using old library book pages. Members of the foundation will be on hand during the day. In the evening, there will be a session of literary-themed trivia for bibliophiles and anyone else.